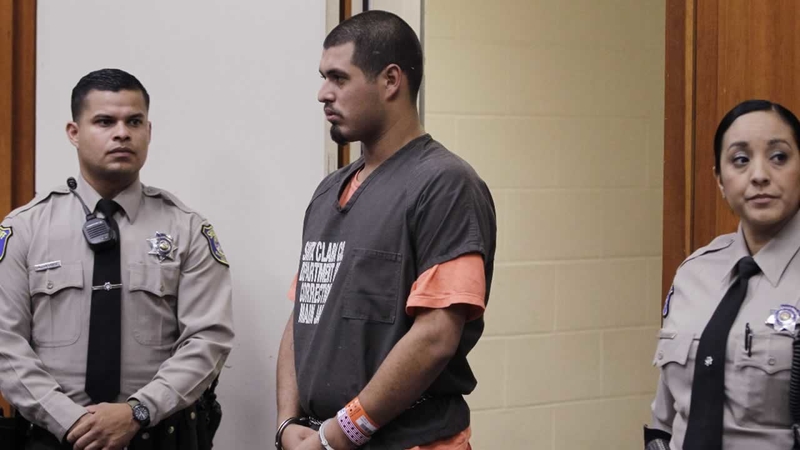 MORGAN HILL, Calif. (KGO) -- The convicted killer of missing Morgan Hill teen Sierra LaMar was officially sentenced to life in prison without the possibility of parole today at the Hall of Justice in San Jose.

Santa Clara County Superior Court Judge Vanessa Zecher sentenced Antolin Garcia-Torres this afternoon after the defense submitted motions to request a new trial earlier today. A jury in June decided on the life term for Garcia-Torres, declining to sentence him to death.

Garcia-Torres' defense team made a last-ditch effort Tuesday morning to request a new trial. His attorneys questioned the credibility and truthfulness of the lead investigator, alleging he mishandled evidence in another case.

However, the judge denied the motion and then proceeded to allow family and friends to deliver their victims' impact statements to the court.

In addition, Zecher said that the outcome of the case wouldn't have been any different if Leon had been impeached from the trial since other evidence, including Garcia-Torres' and Lamar's DNA in the same areas together, could have led to a similar conviction.

Sierra's parents opted to address Garcia-Torres face-to-face from the witness stand, rather than the traditionally-used gallery podium, which would've placed them behind the convicted killer's back.

Four of LaMar's family members - her father, mother, an uncle and aunt - each took time before the official sentencing was handed down to address the court and Garcia-Torres.

The first to speak was Sierra's mother Marlene, who chose to do it from the witness stand.

"I find it incomprehensible to commit a heinous, violent crime," she said. "You caused great pain to our family and yours."

"You have robbed Sierra of what God had planned for her ... you can choose to make a choice and repent and tell us where she is," she said.

"I think about her all the time,and what's been taken from me as a mother," says Marlene LaMar, Sierra's mother.

"It's just hard to believe that this happened," says Marlene LaMar, Sierra's mother. "I still wake up everyday thinking it's a dream, but it's reality."

Garcia-Torres was mostly stoic as the relatives read letters, sometimes looking straight ahead and avoiding direct eye contact, and at other times slightly glancing down and away from the proceedings.

"Even after all the years of missing her, it is tough to grasp the reality of not seeing her again," Sierra's aunt Connie LaMar told the court.

#BREAKING: Judge sentences Antolin Garcia-Torres to life in prison without the possibility of parole for the murder of #SierraLaMar. Probation denied. Judge also says the convicted killer will have to register as a sex offender. #SantaClaraCounty

"You have daughters. How would you feel if somebody took one of them from you?" Steve asked Garcia-Torres, who showed no emotion and didn't react to the question.

"She was so innocent," Steve added. "Just walking to a bus like any other normal day. Everyday, if we see pictures or videos of Sierra, we are left heartbroken and crying."

"After what he did, not saying, not telling where Sierra is, and what happened, I hope it eats away at him, while he's in there, while he rots in prison," says Steve LaMar, Sierra's father.

Santa Clara County Superior Court Judge Vanessa Zecher sentenced Antolin Garcia-Torres Tuesday afternoon after the defense submitted motions to request a new trial earlier in the day. A jury in June decided on the life term for Garcia-Torres, declining to sentence him to death.

Garcia-Torres was also required to register as a sex offender after the prosecution argued that one of Garcia-Torres' main motivations to kidnap and kill Sierra LaMar was for sexual gratification.

Prosecutor David Boyd argued that while Garcia-Torres was being questioned about LaMar's disappearance, he was the only one who brought up anything sexual in nature. In addition, the three women he is accused of kidnapping did not have anything robbed from their possession, and neither did LaMar. Sierra had all of her purse and monetary belongings intact, including her $5 in lunch money, Boyd told the court.

Earlier in the case, a video was shown to the court where Garcia-Torres explains to investigators how his DNA may have been found on Sierra's clothing, which was found covered in dirt stains and with a strong odor of human urine three days after her disappearance.

Boyd pointed out during the trial phase and again during the sentencing phase today that prior to this, investigators never raised the subject of anything sexual or suggested that ejaculate was found on Sierra's jeans.

"I believe if he was given the opportunity, he would re-offend," Zecher said.

"I hope and pray that one day, we will find her, and we will be able to lay her to rest," said Jeff Rosen, Santa Clara County district attorney.

Click here for more stories and videos about the Sierra LaMar case.