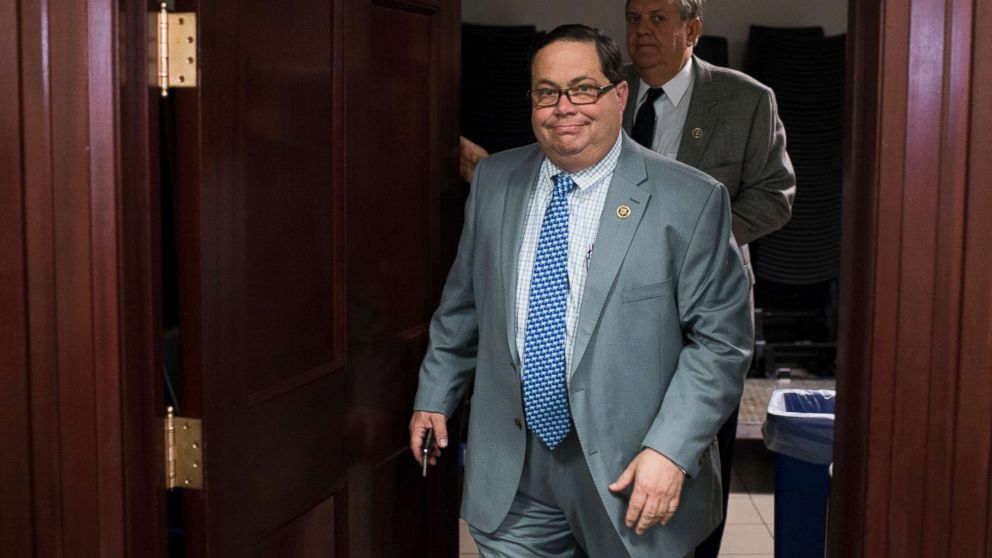 Under pressure to resign amid new allegations of harassment, Rep. Blake Farenthold, R-Texas, plans to retire from Congress after his current term, he announced on Facebook on Thursday.

"I understand that this issue has become a political distraction and that I would be forced to engage in a month long campaign for personal vindication. That's not why I came to Congress," Farenthold said in a video on his campaign's Facebook page. "I'm announcing my decision not to run for re-election."

House Speaker Paul Ryan said Thursday he spoke with Farenthold on Wednesday about his future.

"I had a couple conversations with Blake Farenthold yesterday. I think he's making the right decision to retire," Ryan said.

In the video, Farenthold said that previous allegations of sexual harassment made against him are "false," but acknowledged he had "angry outbursts" and that he failed "to treat people in his office with the respect they deserve."

"I'd never served in public office before. I had no idea how to run a congressional office and as a result, I allowed a workplace culture to take root in my office that was too permissive and decidedly unprofessional," Farenthold said. "It accommodated a destructive gossip, offhand comments, off-color jokes and behavior that in general was less than professional and I allowed the personal stress of the job to manifest itself in angry outbursts and too often a failure to treat people with the respect they deserve. That was wrong."

"Clearly it was not how I was raised. It's not who I am and for that situation I am profoundly sorry," Farenthold said. "An unprofessional work environment is not a crime, but it's embarrassing to me and to my family. It reflects poorly on the institution of congress, on my colleagues and my constituents."

Rekola told CNN that Farenthold verbally abused him and made demeaning comments about his then fiancée before his wedding, treatment that led him to seek medical attention.

"The story speaks for itself," Rekola told ABC News in an email Wednesday night. ABC News has not confirmed his specific allegations.

Last week the House Ethics Committee took new steps to examine previous allegations against Farenthold, voting to establish an investigative subcommittee to actively review claims that he sexually harassed a former aide and retaliated against her when she filed a complaint against him.

Farenthold has denied all of the allegations against him. He's also promising to pay back the government $84,000 in taxpayer funds used to settle a sexual harassment complaint filed against him in 2014.

The allegations against Farenthold come as Republicans and Democrats on Capitol Hill, along with the media and Hollywood, grapple with addressing sexual harassment in the workplace.

A former aide to Republican Rep. Trent Franks has told The Associated Press the congressman repeatedly pressed her to carry his child, at one point offering her $5 million to act as a surrogate. ABC News has not independently confirmed the AP report.

The deadline to withdraw from the Texas congressional primaries was Tuesday, so technically, Farenthold's name would still be on the ballot, a spokesperson for the Texas Secretary of State said. His name could be removed from the ballot if there is a challenge to the candidate application before the mail-in ballots go out.
Report a correction or typo
Related topics:
abc newsnational
Copyright © 2021 ABC News Internet Ventures.
TOP STORIES
3 Bay Area counties may be 1st to mandate masks again
Bay Area hospitals prepare for 4th COVID surge
Biden set to announce vaccine push for all federal employees
Here's how, when to watch NBA Draft on ABC
Tsunami warning canceled after 8.2 quake off Alaska coast
Here's how seawater could be answer to California's drought
SJUSD says non-vaccinated teachers, staff must test twice a week
Show More
COVID-19 surge: Experts explain impact for jobs in tech
USA's Suni Lee wins all-around gold
Finalists interview for Sonoma Co. winery dream job
Pioneering TV pitchman Ron Popeil dies at age 86
Oakland family files lawsuit against driver of deadly hit-and-run
More TOP STORIES News