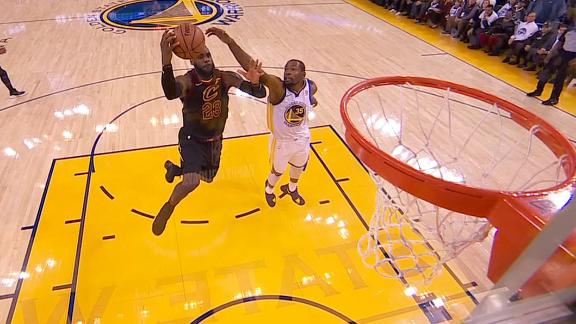 OAKLAND, Calif. -- LeBron James said Kevin Durant got away with a foul on him in the final minute of theGolden State Warriors' 99-92 win over the Cleveland Cavaliers on Christmas Day, while Durant defended the referees' no-call.

"He fouled me twice," James said of his drive to the hoop with the Cavs down 95-92 when Durant blocked James' shot and he lost it out of bounds. "But, whatever. What are you going to do about it?"

Cameras on ABC's broadcast of Monday's game showed Durant shrugging off the contact he made with James while officials reviewed the play to determine which team would retain possession with 24.5 seconds remaining in the fourth quarter.

Referee Derrick Stafford initially signaled it as Cavs ball, but his call was overturned after the review and the Warriors were awarded the possession.

A reporter told Durant that users on Twitter believed that the 2017 Finals MVP should have been whistled for a foul on the play, but Durant again claimed his defense was legal.

"It felt clean," he said. "It's probably the same play a bunch of those dudes on Twitter probably arguing about at 24 Hour Fitness that that wasn't a foul. They've been in that position before, but just not on Christmas at the Oracle Arena. So they know. ... I'm sure if they get that call next week at 24 Hour Fitness, they're going to be pissed that they called a foul. So keep that s--- on Twitter."

The contact between Durant and James was preceded by another failed possession for the Cavs with 1:10 remaining when Durant was guarding James and appeared to hip-check the four-time MVP, causing James to lose the ball out of bounds.

Cavs coach Tyronn Lue, who's rare to challenge the officiating in order to avoid being fined, said it was a close call.

"Initially," Lue said when asked whether James was fouled by Durant, "I thought an initial bump. I think at the basket, I thought it could've been clean. But on the initial bump, it could've went either way. But he didn't call it. It's part of the game."

"It's about the Cavs and Golden State," Lue said. "Wasn't really about them two. They're two great players, but it was a team effort. I thought his team played well. I thoughtKlay [Thompson]making that big shot on the offensive rebound was huge for them. Like I said, our game plan was good, just a couple things we've got to clean up."

But defense was the name of the game. The Cavs were held under 100 points after scoring 100-plus points in their previous 26 games straight and shot a season-low 31.8 percent from the field. (Their previous worst was 38 percent against the New York Knicks in October.)

Durant was a key part of that.

"He's one of the leaders in shot blocks a game, and obviously he had five tonight, so he's been doing a heck of a job of, first of all, taking an individual matchup and then protecting the rim, too," James said. "They got a good, maybe great -- he is great -- defensive mind in [assistant coach] Mike Brown sitting there, too. I know all about it."

James was then asked whether Durant is his toughest individual matchup in the league.

"He is right up there, if not the best," James said. "Kawhi [Leonard]is up there. Russ [Russell Westbrook], James [Harden]. There's a pretty long list. But to play kind of the same position with me and KD being small forwards with Kawhi, so we do a great job of going at it."

The win improved Durant's record to 6-2 in head-to-head battles with James since joining the Warriors. He was 4-17 against James as a member of the Oklahoma City Thunder.

Durant blocks LeBron, Van Gundy adamant it's a foul
Kevin Durant swats LeBron James' shot away with the Warriors up three. LeBron puts his arms up in dismay after not getting a call against Durant for the second time in the final two minutes. 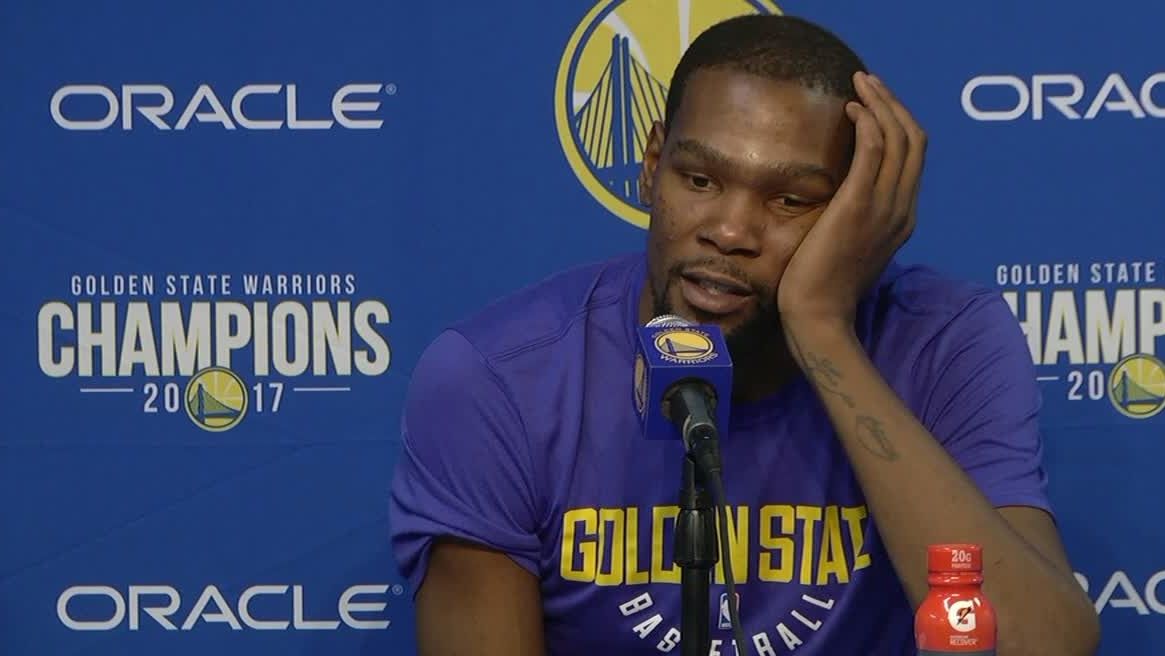 Durant says to keep foul talk 'on Twitter'
When asked about the late defensive play he made on LeBron James with no foul being called, Kevin Durant doesn't care about people complaining about it on Twitter, even "if they get that call next week at 24 Hour Fitness."
Report a correction or typo
Related topics:
sportsespnfoulgolden state warriorscleveland cavalierskevin durantnbalebron james
Copyright © 2020 ESPN Internet Ventures. All rights reserved.
More Videos
From CNN Newsource affiliates
TOP STORIES