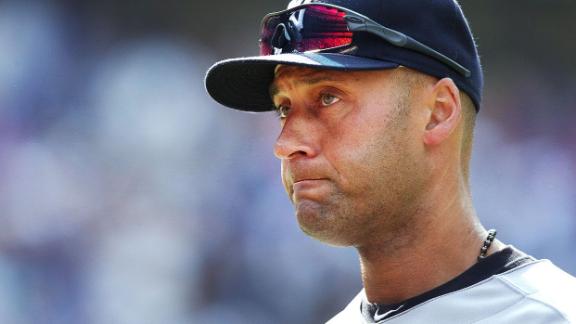 The New York Yankees announced Tuesday that the team will wear a patch of Derek Jeter's final-season logo on all player hats and uniforms from Sunday, the day that the shortstop will be honored at Yankee Stadium, through the end of the season.

The baseballs with Jeter logos that will be put in play on Sunday, and the uniforms used in the game and throughout the rest of the season will be sold by Steiner Sports, company president Brandon Steiner said.

Steiner also has an exclusive autograph deal with Jeter and has been selling more than 200 Jeter-signed products, including game-used jerseys that retail for $25,000.

Leading up to Jeter's final games, an even greater flow of merchandise has hit the shelves. New Era is selling a three-cap box of Jeter hats for $150. The hats, which are available only at Yankee Stadium and official Yankees stores, are limited to 2,014 sets.

New Era Cap president Pete Augustine told ESPN.com that the company, which has been making hats since 1920, has never celebrated a player like this.

"As soon as he announced this was going to be his final season, we could see the market was hungry for it," Augustine said. "We've never seen this much interest from a player perspective, and I'm not sure we ever will."

New Era has made more than 50 Jeter products for sale, including a white leather fitted hat for $99.99.

"We literally can't keep product in stock," Augustine said. "We make it, it sells out."

New Era sells more Yankees caps than any other team, as 23 percent of the company's Major League Baseball business this year has been generated off the Yankees logo. Augustine said Jeter's final season has helped push the numbers by a few percentage points.

The Yankees will also be selling a commemorative Jeter issue of Yankees Magazine for $20.

Jeter's No. 2 jersey is the best-selling jersey in the league this year, according to MLB spokesman Matt Bourne, and Nike is seeking to further capitalize on its spokesman by trademarking "RE2PECT," which it is already using on gear sold in stores.

Tickets for Derek Jeter Day, which the Yankees announced on July 18, have become among the hottest tickets of the year, along with Sept. 25, his last home game.