Baby inches away from bus collision in Richmond 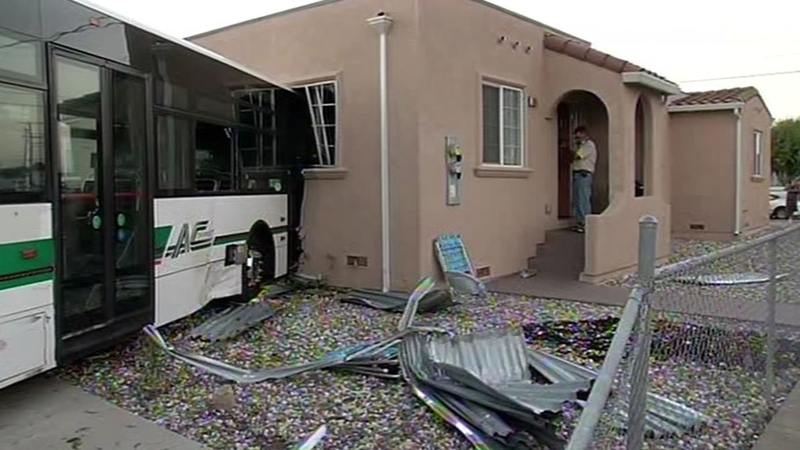 Baby inches away from bus collision

RICHMOND, Calif. (KGO) -- An AC Transit bus was hit by a stolen car and slams into a home, missing a 3-month-old by just inches. People were trapped inside the bus trying to get free and the driver of the stolen car is still out on the loose.

The bus crash happened at 18th Street and Burbeck Avenue Friday evening. The bus was doing between 20-25 mph when it struck a house in Richmond around 5:30 p.m.

Resident Ashley Ortega said, "My son was inches from being hit by the bus."

She found her 3-month-old son sitting in his bouncy chair, in the living room, looking up at an AC Transit bus.

Ashley said, "And my daughter was in the back bedroom and I called her and grabbed my son and I got out because I didn't know what was going to happen."

The gas service line was severed and leaking. Meanwhile seven dazed and bloody passengers, including two children and a bus driver, were trying to escape the bus.

Bus passenger Desiere Uperesa said, "It was hard to get off because we didn't know how to exit. [The doors] wouldn't open. It was hard to open it, so we went through the window."

Richmond Police Lt. Andre Hill said, "We briefly evacuated the area because of the gas leak, but since the area has been deemed habitable again and the residents should know that they are safe inside their homes."

But the Ortega's home is now red-tagged.

Ashley's husband, Francisco Ortega, said, "What can I say? I mean, I got to find a place to live now. So, that's all."

Masks could prevent up to 14K COVID deaths by August, model predicts