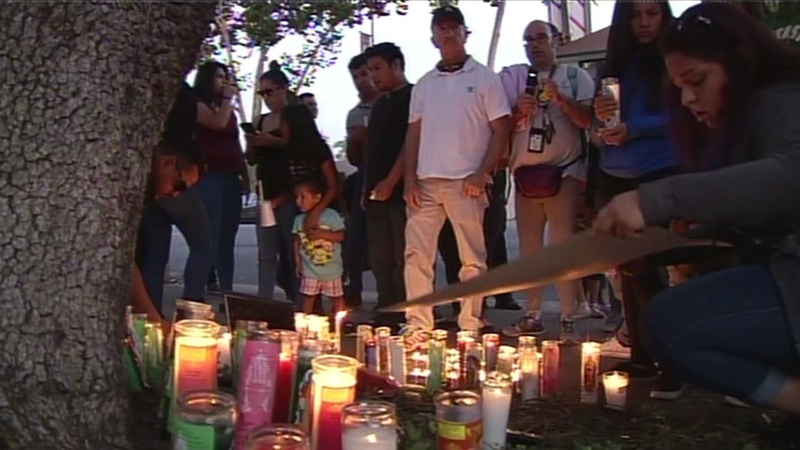 SAN JOSE, Calif. (KGO) -- Three teenagers were killed late Wednesday night in the South Bay after the stolen car they were in crashed during a street race.

Family members of three teens killed Tuesday night were overwhelmed with grief, unable to explain how the teens ended up street racing in a stolen car.

The three teens were killed when the Honda they were in struck a light pole and slammed into a tree. Another 15-year old boy was badly injured.

"When we heard it was a stolen car we couldn't understand why," said Melanie Martinez, a relative of Toledo. "You don't know what happened or who is at fault or anything. It's just you know, probably teenagers being kids."

Last year, a block away from Tuesday's crash, another person died in a drag-racing crash on East Santa Clara Street. Just seven months ago, another teen died, and two others were injured, while racing down West Hillsdale Avenue. Peggy Manzano says it's happening too often and too close to her daughter.

"It happens every weekend, or every day," said Marlany Bernal a friend of Toledo's.

But Toledo's friend Marlany Bernal says those days are over now.

"Noticing that they're gone, it's dangerous. Everybody out there, they need to stop doing it. Like, it's not fun and games anymore," Bernal said.

Police are still looking for the other car that took off after the last night's fatal crash.

Family members say shocked to learn 18 yr old Oscar Gonzalez was in stolen car when it crashed, he died at hosp pic.twitter.com/KH27k6G8Z4

A witness took this photo noting we after crash you can see stolen Honda crumpled up by tree pic.twitter.com/v6VMjbLpsx