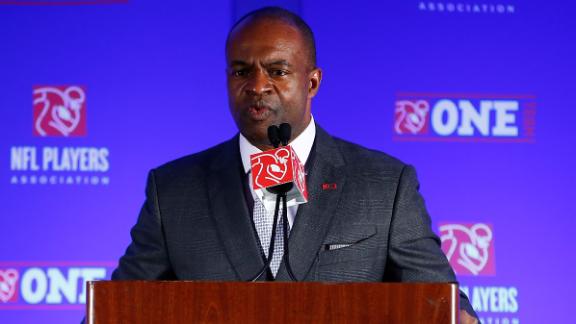 The NFL Players Association will take a vote Tuesday among its 32 player representatives on a radically revised drug policy after a daylong face-to-face negotiation with the league in New York, according to player sources.

The proposed policy will include human growth hormone testing for the first time, as well as make significant changes that raise limits for marijuana testing and expand neutral arbitration, sources said.

The two sides still have some disagreement on proposed issues, but the NFLPA agreed to take the league's latest proposal to the player reps for a vote. The union informed the majority of its player reps Monday evening of the development. Four others are involved in the Monday night double-header.

One late sticking point is that the league has received complaints and concerns from owners regarding possible reinstatement for recently suspended players such as Josh Gordon of the Cleveland Browns and Wes Welker of the Denver Broncos, who would not have been suspended under the proposed policy. Those owners were displeased that a new agreement would not necessarily alter the standing of their own suspended players.

Nevertheless, there are numerous unidentified players in the league's substance-abuse program who would benefit from the changes, sources said.