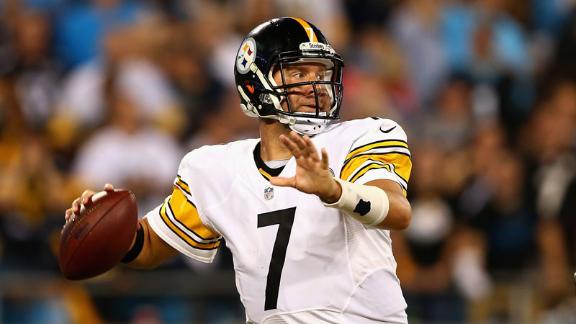 Roethlisberger is listed as probable for the 1 p.m. ET game Sunday against the visiting Tampa Bay Buccaneers after he was limited in drills Friday.

Roethlisberger's limited participation was not due to injury after he practiced fully Wednesday and Thursday.

He played every snap last season, and the 11th-year veteran hasn't missed a game since early December 2012.

Bruce Gradkowski is Roethlisberger's backup, and he has played only seven snaps since signing with the Steelers, his hometown team, in March 2013. Gradkowski, who has 20 career starts in the NFL, saw his first action with the Steelers near the end of a 37-19 win over the Carolina Panthers last Sunday night.

Roethlisberger is tied for third in the AFC with 778 passing yards, and he is 16-2 lifetime against NFC teams at Heinz Field. He needs 117 more yards to reach 35,000 for his career.

Inside The Huddle: QB Trends
The new trend for quarterbacks is to throw shorter and call plays faster.