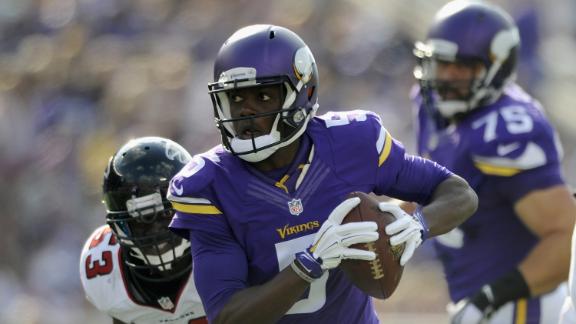 After a stirring first start in the NFL, Teddy Bridgewater wasn't able to stay long enough to finish it.

The rookie quarterback was carted to the locker room with a sprained left ankle in the fourth quarter of Sunday's 41-28 victory against the Atlanta Falcons.

Bridgewater, who appeared to suffer the injury on a fourth-quarter scramble attempt, was diagnosed with a sprain after X-rays on the ankle were negative. He returned to the Vikings' sideline shortly later and was not wearing a cast.

"I felt what happened during the play. It was basically a non-contact injury," Bridgewater said after the game when asked if he was worried about the injury as he was carted off.

"I tried to make a plant move, and just rolled my ankle in a funny way. I wasn't worried at all."

Vikings coach Mike Zimmer said Bridgewater will undergo an MRI but also claimed that he assumes the rookie will play in Thursday night's game against Green Bay.

"I assume he's going to play. I don't really know. Teddy is pretty dang tough. I did talk to him in the locker room after the game and he didn't give me any indication he wasn't. I didn't specifically ask him."

"That's something that's out of my hands right now," Bridgewater said of playing Thursday. "I'm going to spend as much time as I can with [athletic trainer] Eric Sugarman and the training staff they have here. That will be a decision they can make."

Third-string quarterback Christian Ponder -- who was only active for the first time this year after Matt Cassel broke his foot last week against New Orleans -- finished Sunday's game in place of Bridgewater.

Before the injury, Bridgewater completed 19 of 30 passes for 317 yards, also running for a touchdown as the Vikings piled up more than 500 yards of offense and took a 38-28 lead.

"If needed, I think I could have [come back in the game]," Bridgewater said. "But the situation we were in, we were up, the defense was playing great. Christian was able to come in and finish the game. He's a great guy, and he's always paid attention to the game. Hats off to him, for coming in and finishing the game."

Ponder, who lost the starting job this season after being taken 12th overall in the 2011 draft, could become the third Vikings quarterback to start a game in the first five weeks of the season if Bridgewater isn't able to play Thursday night.

"I'm going to write a book at the end of this season; which one of you guys wants to write it for me -- for all the things that have happened," Zimmer said of Ponder coming in. "I've been writing them down, these situations. It's nice to have Christian in there, a guy that's been to the playoffs and done a lot of things, but that's kind of what this team has been doing right now -- stepping up."

Bridgewater, Asiata Carry Vikings
Teddy Bridgewater threw for 317 and rushed for a touchdown before he left with an ankle injury, and Matt Asiata ran in three touchdowns in the Vikings' 41-28 win over the Falcons.