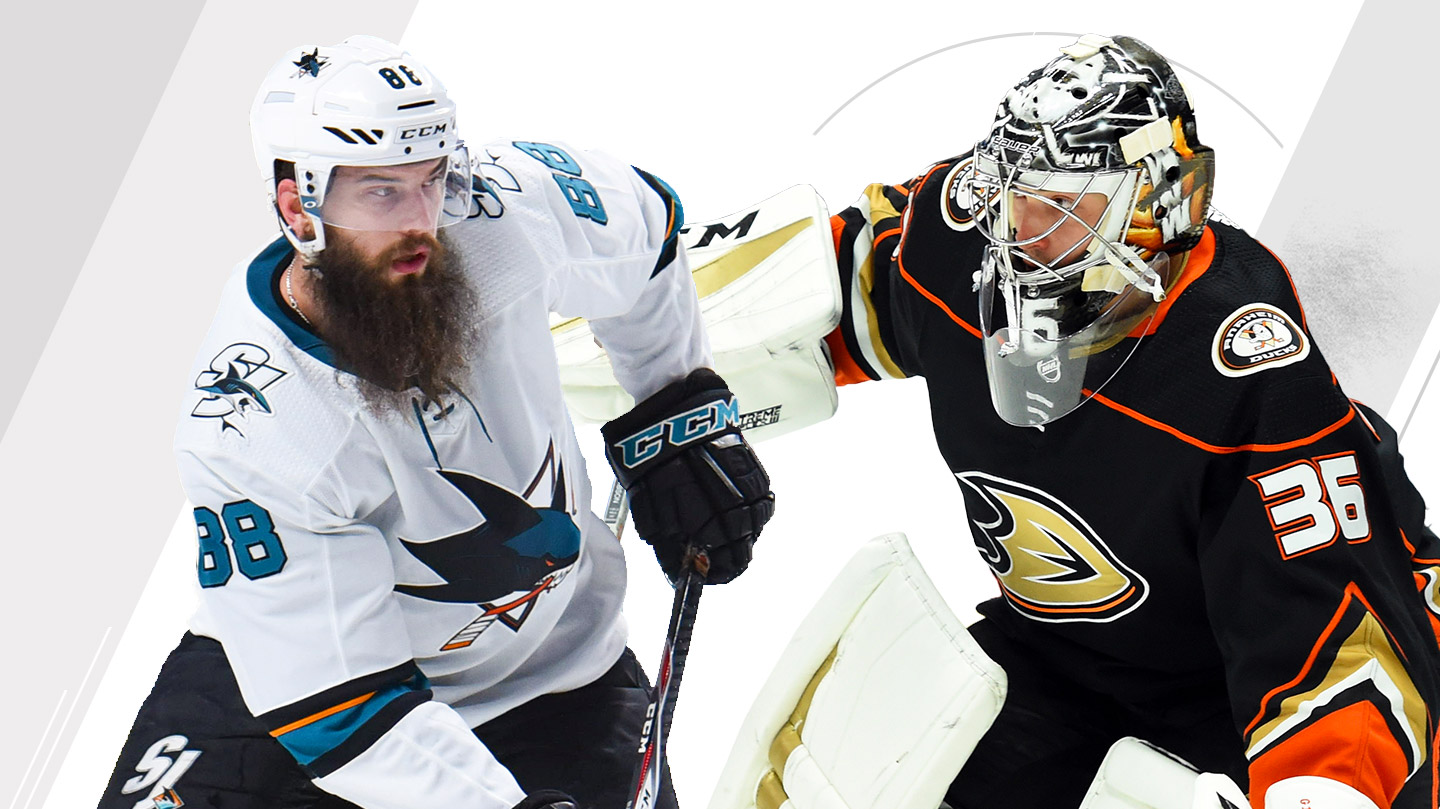 The Anaheim Ducks (44-25-13, 101 points) are a playoff team. This was expected before the season, but perhaps not in this fashion: Ryan Getzlaf was limited to 56 games and Ryan Kesler to 44, with other players limited by ailments; goalie John Gibson carried the Ducks to the postseason with 60 starts (before, of course, he was injured near the end of the campaign).

Both team made significant trades this season, with the Ducks flipping defenseman Sami Vatanen to the Devils for Adam Henrique on Nov. 30, and the Sharks acquiring winger Evander Kane from the Sabres at the trade deadline.

This particular incarnation of the Battle of California has happened only once before: In 2008-09, when the Ducks advanced in a 4-2 first-round win. What happens this time between two well-matched teams?

First line. Getzlaf, Corey Perry and Rickard Rakell have generated 25 even-strength goals in 43 games together, surrendering 18. While Perry isn't nearly the sniper he once was (17 goals), Rakell had 34 goals this season (22 of them at 5-on-5). The Sharks have made a lot of line salad this season due to injuries and ineffectiveness. Based on ice time, Joe Pavelski (22-44-66) and trade deadline pickup Evander Kane (9-5-14 in 17 games) would be the top pair. Their best partner has been Joonas Donskoi, who just returned to the lineup after a mid-March injury. OK ... their best, best partner would be Joe Thornton, who is working his way back from an injury that's limited him to 47 games. Advantage: Ducks, unless Jumbo is healthy.

Defense. Brent Burns' shooting percentage fell off a cliff (3.6) this season, resulting in just 12 goals, but his 67 points put him third in the NHL among defensemen. He's reunited with Paul Martin, who toiled in the AHL before taking over Joakim Ryan's spot in the lineup late in the season. Marc-Edouard Vlasic and Justin Braun have been uncharacteristically ineffective at times this season, skating to a minus-3 goal differential and a minus-7.07 in relative Corsi.Brenden Dillonand Dylan DeMelo round out the group. The Ducks are anchored by Hampus Lindholm and Josh Manson (plus-20 goal differential). Brandon Montour and Francois Beauchemin have been frequent partners, and might need to be again after Cam Fowler's injury. Advantage: Sharks.

Goaltending. Martin Jones had a .914 even-strength save percentage in 60 games, and Aaron Dell nearly swiped his job earlier this season. His playoff history and his underlying postseason numbers tell two different stories. Gibson was outstanding this season (.927 even-strength save percentage) despite the highest work rate of his career. He was injured late in the season, but is expected to be ready for the postseason. If not, Ryan Miller can be a capable replacement. Advantage: Ducks.

Special teams. Despite their firepower, the Sharks have had a middling power play for the past two seasons, finishing No. 15 (20.7 percent) this season. The Ducks were eight spots worse, at 17.8 percent. The Sharks, however, drew 43 more power plays than the Ducks. On the penalty kill, the Sharks were second in the NHL, at 84.8 percent, while the Ducks were fifth (83.2). Advantage: Sharks.

Coaching. This is Peter DeBoer's third trip to the postseason with the Sharks. He's coached both San Jose and the New Jersey Devils to the Stanley Cup Final, and has a .556 playoff winning percentage. Randy Carlyle coached the Ducks to the conference finals last season, which went a long way to getting the Toronto stink off of him. Advantage: Even.

Health. Fowler is gone for two to six weeks with a shoulder injury, and that's an impactful loss for Anaheim. He's the Ducks' ice-time leader (24:51) and is the team's second-leading scorer on the blue line (32 points). Gibson's recent injury is a worry, too. Veteran defenseman Kevin Bieksa remains out after hand surgery. For the Sharks, Thornton is the main concern, and he's doubtful for Game 1. Advantage: Sharks.