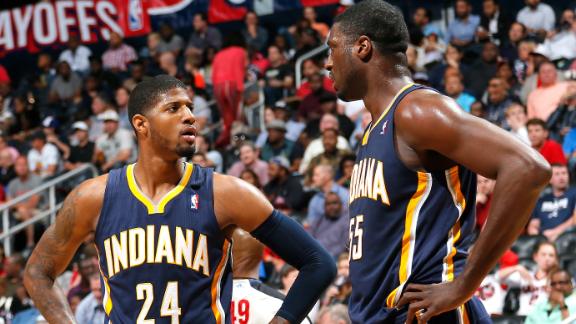 ESPN
ATLANTA -- Fairly or not, Roy Hibbert has become the symbol of all that's wrong with the Indiana Pacers.

He hopes to turn that around Saturday, though what his role will be was unclear Friday as coach Frank Vogel was tightlipped about his lineup plans.

"You'll find out tomorrow," was all Vogel would say, not long after a spirited film session at the team hotel.

The 7-foot-2 center has struggled mightily in the first three games against the Atlanta Hawks, raising the possibility of coming off the bench in Game 4.

The top-seeded Pacers are down 2-1 in the best-of-seven series and must steal a win at Philips Arena to avoid a mammoth upset.

Hibbert has scored only 18 points in the series on 7-of-25 shooting, and he looked downright lost in Atlanta's 98-85 win in Game 3.

Several times, his shots were so far off the mark he didn't really seem to know where he was on the court. He also has struggled at the defensive end, lured out of his comfort zone near the basket by the outside shooting of center Pero Antic and forward Paul Millsap.

Atlanta's big men have put up a combined 26 shots from beyond the 3-point line, presenting all sorts of matchup problems for the lumbering Hibbert.

"It's a difficult lineup for me," Hibbert said. "I'm not used to it. It takes me out of position to protect the paint and to get rebounds in the paint and contest shots."

The Pacers have actually been more effective without a true center on the court, thanks to Luis Scola. The 6-foot-9 forward has scored 37 points in the last two games, giving the Hawks fits with his mid-range shooting.

Hibbert said he's going on the assumption that he'll be starting in Game 4, but he wants what's best for the team.

"I'll do whatever Coach feels is necessary to win," he said. "As far as I know, I'm still playing. I don't know if it will be with the second unit."

Most amazingly of all, Hibbert doesn't even have a block in the series after swatting away 182 shots during the regular season.

"We're trying to make it hard for him. We're trying to run him," Hawks forward DeMarre Carroll said. "I think us running him makes him tired a lot, and that affects him at the offensive end. We've just got to keep playing our game. Paul and Pero have got to keep stretching him out."