Chevy makes most of exec's gaffes 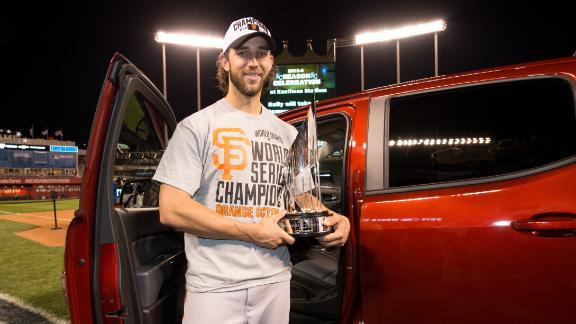 DETROIT -- Shortly before 9 a.m. on the day after the worst night of his life, Rikk Wilde got the phone call from his big boss at General Motors.

No, he wouldn't be fired. Now get out there and sell some trucks.

The call, from Chevrolet vice president Brian Sweeney, had to be a relief for Wilde, who makes his living as a zone manager and liaison between GM and its Kansas City-area dealers.

"The Chevy leadership team called and told him he did nothing wrong. It's all good. Everyone here has his back," said Michael Albano, the brand's top spokesman.

GM had lined up Wilde, a lifelong Royals fan, for the postgame presentation because he's a good employee and loves baseball. There was hope that he'd be giving the keys to a Chevrolet Colorado to someone on the home team. But instead it went to the San Francisco Giants ace, who saved Game 7 by shutting out the Royals for five innings.

Wilde had practiced for the moment, an effort to draw attention to GM's newest product, and brought notes just in case he forgot something.

When Fox Sports announcer Erin Andrews introduced him, he was sweating. As he started to say his lines, he became breathless. He stumbled and had to look to his notes. He ad-libbed a line that would bring guffaws on social media: "It combines class-winning and leading, you know, technology and stuff, with Wi-Fi powered by OnStar."

#Technologyandstuff was trending on Twitter, as was #ChevyGuy, with many comparing Wilde to the late comedian Chris Farley.

"ChevyGuy is the most hilariously awkward person ever," one person tweeted.

"Chevy really sold me on their new Colorados with that class leading technology and stuff and immediate recalls!!!," another tweeted, an obvious reference to GM's safety problems.

But around 1:30 a.m. ET, Albano said he noticed the sentiment starting to shift.

"We LOVE the #Chevyguy! Don't change a bit #Wildeman!," wrote one tweeter.

"We saw quickly the 'technologyandstuff' tagline kind of take off and start to trend," Albano said. "That's when you realize that you have something there that you might want to embrace."

GM got a bigger chance to promote its re-entry into the small to midsize pickup truck business because Wilde drew so much attention to the usually forgotten MVP presentation.

"He was on message," Albano said. "The truck has technology and stuff. We will use that term and stuff."