Trump, Putin mocked by Finnish newspaper billboards over freedom of the press 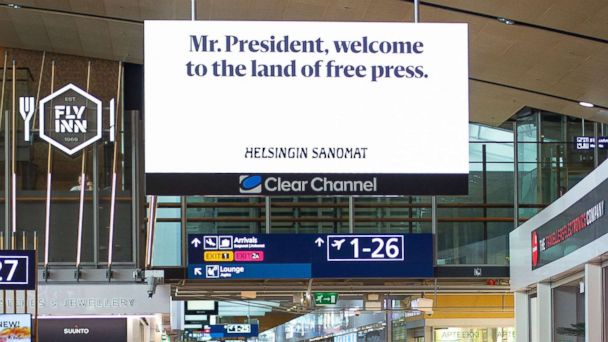 HELSINKI -- Finland's largest newspaper is welcoming President Donald Trump and Russian President Vladimir Putin with a series of billboards ahead of their long-awaited summit -- mocking their notoriously bad relationships with the media with pointed messages of freedom of the press.

Nearly 300 billboards -- which preview some of both presidents' most "turbulent relations" with the media from 2000 to 2018 -- are posted along the routes from the airport to the site of the summit, according to a press release about the campaign from Helsingin Sandomat.

They are written in Russian as well as English.

One poster, with a headline from 2004, reads in Russian: "Russian reporter who criticized Putin gains asylum in Britain."

Another billboard reads in part: "Mr. President, welcome to the land of free press."

According to Kaius Nieme, senior editor-in-chief of Helsingin Sanomat, the campaign's goal is to "raise the topic of the freedom of the press around the world."

"This is a statement on behalf of critical and high quality journalism," Nieme wrote in the press release. "As we welcome the presidents to the summit in Finland, we want to remind them of the importance of free press. The media shouldn't be the lap dog of any president or regime."

"We want to show our support to those colleagues who have to fight in ever toughening circumstances on a daily basis, both in the U.S. and Russia," Nieme continued.

Relations between the press and government officials in both the U.S. and Russia have been problematic throughout the years. In Russia, freedom of the press has become "almost non-existent" during the reign of Putin, according to the press release from the paper.

Trump, meanwhile, has called the news the "enemy of the people" and referred to their reporting as "fake news." On his way to Helsinki on Sunday, he took to Twitter to repeat the verbal attacks.