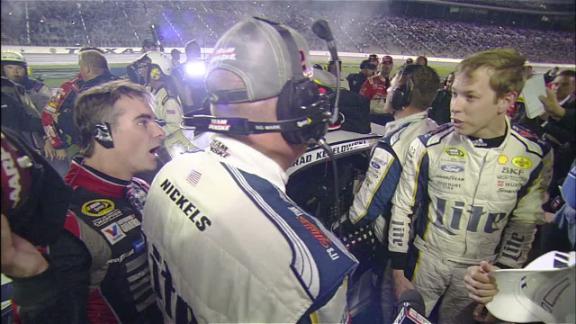 CHARLOTTE, N.C. -- Roger Penske on Monday gave his unwavering support to driver Brad Keselowski, who has now been involved in two post-race fights in four races.

Keselowski was confronted by Jeff Gordon on Sunday at Texas Motor Speedway, where the two had contact on a late restart while racing for the win. Kevin Harvick, who was watching the post-race confrontation from several feet away, pushed Keselowski from behind into a scrum of crew members. That ignited a brief scrum between the Team Penske and Hendrick Motorsports crews.

Keselowski and Gordon were bloodied in the melee, but neither driver appeared to throw a punch. Hendrick Motorsports said Monday it is reviewing the matter. NASCAR is doing so, as well, and could penalize the drivers, crew chiefs or crew members.

But Penske does not believe his star driver did anything wrong in a Chase for the Sprint Cup championship the team owner said has "provided great excitement and intense competition."

"Brad Keselowski is a champion who competes to win in every race, which is what I expect of him," Penske said in a statement. "While the actions by others following the race in Texas were unfortunate, Brad has my 100 percent support as we now move on to Phoenix for the next stage of the NASCAR championship."

Gordon was the leader on what was expected to be a two-lap overtime sprint to the finish. Keselowski restarted third and tried to wedge his car in a gap between Gordon and Hendrick teammate Jimmie Johnson.

The gap quickly closed when Gordon came down the track and the contact between Keselowski and Gordon caused Gordon to get a flat tire and spin. He went from racing for a win and the automatic berth to the Nov. 16 Chase finale at Homestead to a 29th-place finish. He's now fourth in the eight-driver Chase field, and only four drivers will race for the title.

Keselowski was adamant that he saw a hole between Gordon and Johnson, and he also was going for the victory and the berth into the Chase's final round.

Keselowski was fined $50,000 by NASCAR last month for a post-race meltdown at Charlotte, where a poor finish jeopardized his Chase chances. Denny Hamlin had to be restrained after the race from confronting Keselowski, and Matt Kenseth jumped Keselowski from behind in the garage. Kenseth was not fined because he did not throw a punch.

Keselowski went on to win the next week at Talladega and advance to the third round of the playoffs. After the race, Penske also firmly defended his driver, who has six wins this season and gave Penske his first career Cup title in 2012.

"These guys are jealous of the job he's done this year," Penske said after Talladega. "He's won six races. He's made poles. He's been up front. Nobody likes to see a guy win like that. I want him to get mad. I don't want him to take it."

Gordon, Keselowski Fight After Race
Jeff Gordon and Brad Keselowski got into a fight after an altercation during Sunday's race at Texas Motor Speedway.