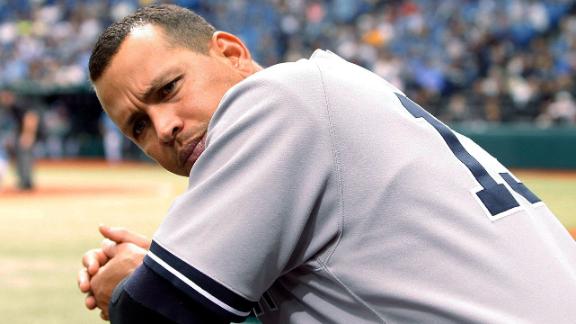 Alex Rodriguez admitted to the use of performance-enhancing drugs during a meeting with the Drug Enforcement Administration in January, DEA documents show.

A lawyer for former University of Miami pitching coach Lazaro "Laser" Collazo, who is charged with conspiracy to distribute PEDs, told The Associated Press that Rodriguez confessed to steroid use, citing DEA documents provided by the government to defense attorneys.

The Herald reported that the recently reinstated New York Yankees slugger met with DEA agents on Jan. 29 at the agency's South Florida field office. Given immunity from prosecution, Rodriguez told investigators he had used banned substances between late 2010 and October 2012 -- including testosterone cream, testosterone gummies and HGH -- supplied by Anthony Bosch, who owned the Biogenesis of America clinic in Coral Gables.

According to the report, one such injection took place in the men's room of a Miami nightclub.

"Rodriguez injected the HGH into his stomach," the DEA report stated, according to the newspaper. "Rodriguez said Bosch told him the HGH would help with sleep, weight, hair growth, eyesight and muscle recovery."

According to the report, Rodriguez was trained in tricks to beat a urine test.

"Bosch advised him to only use mid-stream urine for MLB drug testing," the DEA report stated, according to the newspaper. "Bosch told Rodriguez not to use the beginning or the end urine stream."

Bosch has pleaded guilty in the case and is cooperating with the prosecution.

Rodriguez has publicly denied any use of banned substances during his time with the Yankees, which began in 2004. In 2009, the Yankees third baseman admitted to using PEDs while with the Texas Rangers in 2001.

Major League Baseball commissioner Bud Selig suspended Rodriguez for 211 games in August 2013 for violations of the sport's drug agreement and labor contract. The penalty was cut to the 2014 season in January by arbitrator Fredric Horowitz.

Rodriguez proclaimed his innocence and sued in federal court then withdrew the suit and accepted the penalty.

The Herald reported Bosch told the DEA that A-Rod agreed to pay for steroids for 20 Biogenesis customers after the clinic closed to keep Bosch from talking about his involvement.

That could prompt MLB to investigate whether Rodriguez could be suspended again under the sport's drug agreement for violations related to the sale and distribution of PEDs, which are separate from the prohibitions on personal use.

Asked about Rodriguez's documented admission, his lawyer, Joe Tacopina, said in a text message to ESPNNewYork.com: "Grand jury secrecy laws ... which appears to have been violated ... prevents me from answering one way or the other."

Attorney Frank Quintero Jr., who represents Collazo, told the AP that he has a copy of the DEA documents but cannot release it under federal evidence rules.

"I can for your report confirm that the report by the Herald is accurate as to what Rodriguez said," Quintero said in an email. "I don't have a dog in this fight. My client has no involvement with ANY major league players concerning the use of banned substances."

The Herald's report comes a week after court filings revealed that Rodriguez paid his cousin Yuri Sucart nearly $1 million in exchange for Sucart's silence regarding Rodriguez's illegal PED use.

Neither the DEA nor the Miami U.S. Attorney's Office commented on the report. However, in a separate public court filing, prosecutors made clear that Rodriguez would be a star witness if the case against Sucart and others goes to trial. It is set to begin Feb. 9 in Miami federal court.

"Rodriguez has a prominent role in the government's proof of the ... conspiracies to distribute testosterone and human growth hormone," the prosecutors wrote.

Rodriguez told agents it was Sucart who introduced him in 2010 to Bosch, who falsely posed as a physician nicknamed "Dr. T." Rodriguez paid mainly in cash and Bosch promised secrecy, although he would eventually begin to cooperate with MLB and federal investigators. From the DEA report, the Herald said Rodriguez admitted he also helped pay for Bosch's criminal defense, including $25,000 as a down payment to retain one attorney.

In total, 14 MLB players were suspended last year following the Biogenesis investigation. None have been charged with crimes.

Rodriguez, who turns 40 next summer, played in just 44 games in 2013 and hit seven home runs to increase his total to 654, fifth on the career list. He is owed $61 million for the final three years of his contract with the Yankees. He could receive an additional $6 million each for five milestones that the team designates as historic achievements.

Don Hooton, whose Taylor Hooton Foundation (named for his son) Rodriguez pledged to help in spreading the anti-steroid message to children, said he felt betrayed by Wednesday's news.

"We helped provide him a very credible platform for him to do his mea culpa and demonstrate to the public by speaking with kids that he learned the error of his ways, that he was giving back and making amends," Hooton, who was present for Rodriguez's 2009 news conference, told ESPNNewYork.com's Ian O'Connor. "And now it looks like that mea culpa and last apology weren't very genuine.

"I'm very, very disappointed but not surprised after all of the revelations that have come out across the past several months. After the press conference in 2009, I had Alex out with literally thousands of kids from Miami to New York doing programs at Boys & Girls Clubs, high schools and middle schools. If his admission is accurate, his messages to kids about learning his lesson and playing performance-enhancing-drug free were disingenuous to say the least."

Information from ESPNNewYork.com's Andrew Marchand and The Associated Press was used in this report.