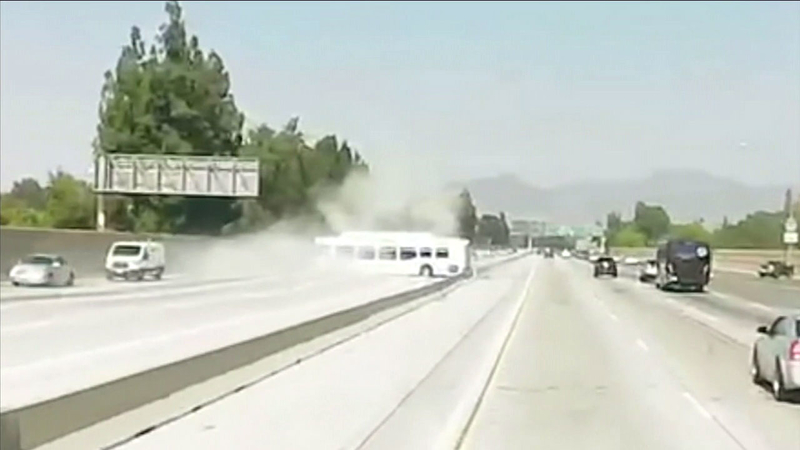 NORTH HILLS, LOS ANGELES -- Exclusive new video shows a close view of the terrifying moments when a bus spun out of control on the 405 Freeway and smashed through the center divider, creating a massive jam and injuring dozens of people.

One witness said the incident was sparked by a case of road rage, saying that is how someone on the bus that crashed described the incident, the witness told Eyewitness News.

The witness alleges the driver of a white vehicle towing a trailer seen in the video cut the bus off and stepped on the brakes. The bus driver lost control in an effort to avoid the collision.

The white vehicle is seen in the video driving away from the scene.

Thomas said if the driver did in fact cause the crash, there could be criminal charges.

"If the white vehicle was involved, and we're going to go with the assumption that it was based on the video, the driver should have stopped," Thomas said.

The witness tells Eyewitness News they believe there's rear-end damage to the vehicle seen driving away in the video.

The video shows the bus first swerving to the right and hitting at least one car as it drove in moderate traffic on the northbound side in the North Hills area.

The 405 Freeway reopened about 10 hours after a bus crash shut down southbound lanes in the North Hills area.

The crash happened Sunday around 1 p.m. near the Nordhoff exit. At one point both directions of the freeway were shut down as authorities worked to treat patients and clear the wreckage.
The northbound lanes were later reopened, but traffic passed slowly by the debris. The southbound lanes didn't reopen until after 11 p.m.

A bus crashed into cars and then smashed through the center divider of the 405 Freeway in the North Hills area Sunday, creating a massive backup and sending more than two dozen people to the hospital.

Firefighters evaluated about 40 people for injuries after the crash. Of those, five were listed in critical condition, including the bus driver, and 20 were sent to the hospital with a range of minor to moderate injuries.

Authorities said the driver, identified as 60-year-old Ofelia Rodriguez of Granada Hills, suffered several broken bones.
The crash involved a private charter bus that was carrying 37 passengers back from a church event at the Forum in Inglewood. Other buses were also caravaning from the event, but were not involved in the crash.