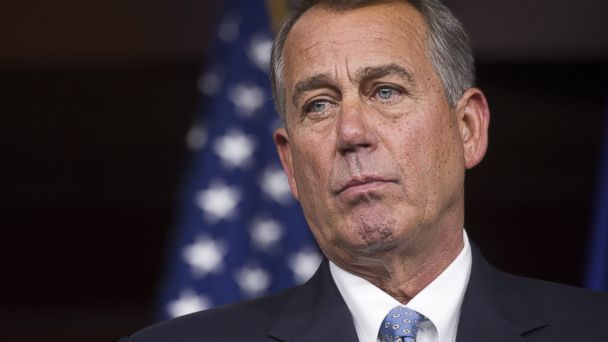 House Speaker John Boehner said that President Obama is damaging the institution of the presidency by taking unilateral action to reform the country's immigration laws, setting up another political showdown on both ends of Pennsylvania Avenue as Republicans work on a strategy on how best to react to Thursday's announcement.

"All year long I've warned the president that by taking unilateral action on matters such as his health care law, or by threatening action repeatedly on immigration, he was making it impossible to build the trust necessary to work together," Boehner, R-Ohio, said. "As I warned the president, you can't ask the elected representatives of the people to trust you to enforce the law if you're constantly demonstrating that you can't be trusted to enforce the law."

"The president repeatedly suggested that he was going to unilaterally change immigration law and he created an environment where the Members would not trust him," Boehner added. "Trying to find a way to work together was virtually impossible and I warned the president over and over that his actions were making it impossible for me to do what he wanted me to do."

The House speaker predicted that Obama's actions "will only encourage more people to come here illegally" and "punishes those who have obeyed the law and have waited their turn."

"We saw the humanitarian crisis on our border last summer, how horrific it was. Well next summer it could be worse," Boehner warned. "With this action the president has chosen to deliberately sabotage any chance of enacting bipartisan reforms that he claims to seek."

Boehner said he warned the president that his actions could harm the institution of the presidency when the two spoke on Thursday afternoon before the president's address.

"As I told the president yesterday, he's damaging the presidency itself," he said. "President Obama has turned a deaf ear to the people that he was elected and we were elected to serve."

While Boehner refused to enumerate how the House might react to the president's actions, he stressed that "the House will in fact act."

"The people's House will rise to this challenge. We will not stand idle as the president undermines the rule of law in our country and places lives at risk," Boehner pledged. "We'll listen to the American people, we'll work with our members, and we'll work to protect the constitution of the United States."