KGO
By by Leslie Brinkley and Cornell Barnard 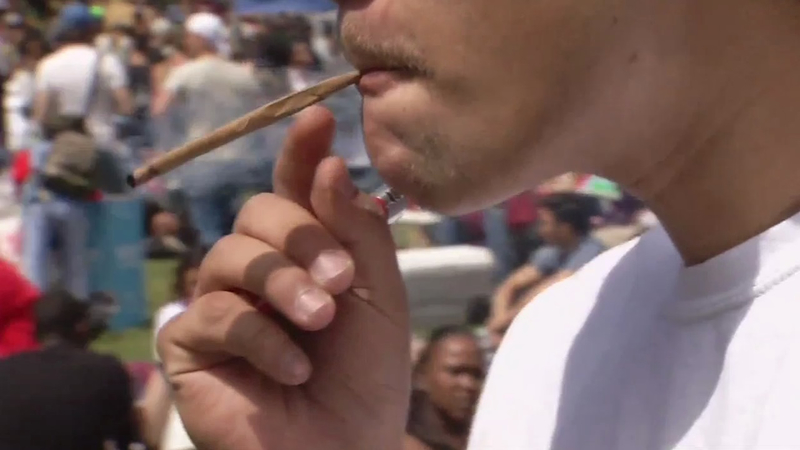 Sky7 HD captured a cloud of smoke that wafted above the park, part of the unsanctioned marijuana smoke-out near Sharon Meadow, also known as Hippie Hill.

A small stampede of people at the festival ran in a panic from Hippie Hill late in the day because park rangers say someone spotted a man with a gun.

Police said no one was injured and later arrested the suspect.

Officials said a total of six people were arrested, one for robbery.

There was haze of marijuana smoke and cannabis cake pops during the festivities.

"It's all about great vibes, just being out here enjoying yourself, meeting new people," said Tigre Fowler.

The 4/20 scene looked a little different at Harborside Health Center in Oakland where an 87-year-old man and his 85-year-old wife were looking for pain relief.

"We're looking for pain relief," said Joe Cecchini, a Stockton resident. "We've never had any connection with marijuana of any kind."

"What you see in the Park is a small slice of the cannabis community reflecting youth and exuberance. But, if you go to Rossmoor Retirement Community we have hundreds using cannabis there," DeAngelo said.

It's a tipping point for pot, with 20 states now looking at new cannabis measures on the November ballot, including California, where several initiatives are still gathering signatures to legitimize recreational pot for adults over 21.

On what could potentially be the last illegal 4/20 day in San Francisco, police let the crowd celebrate, but zeroed in on four parents who brought small children.

"We just escorted the kids and the parents out of the park," said Capt. John Sanford of the San Francisco Police Department.

A hot dog vendor was arrested when he refused to leave and resisted arrest. Otherwise it was a peaceful pot-filled day in the park with 10,000 pounds of litter left to clean up.