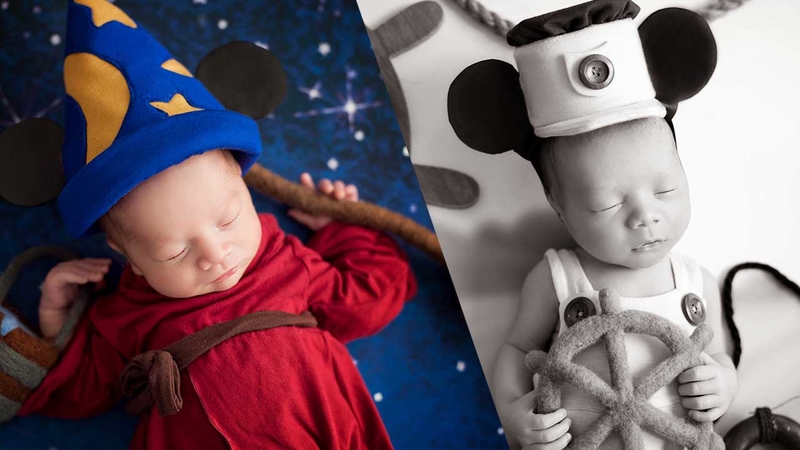 To celebrate Mickey Mouse's birthday, Babble teamed up with Karen Marie of Belly Beautiful Portraits to recreate his most legendary looks using some of the cutest models around - sweet newborn babies.

Marie, a longtime Disney fan - whom you might remember from her previous Babble collaboration where she dressed babies as Disney villains, or when she transformed them into Disney princesses - pays beautiful homage to Mickey in her latest shoot. She says she was particularly excited about this project for personal reasons.

"A famous Walt Disney quote that really resonated with me while researching this project was, 'I only hope that we never lose sight of one thing - that it was all started by a mouse,'" says Marie.

Marie explains that, like many of us, she grew up watching Walt Disney classics like The Little Mermaid and visiting Disneyland with her family - traditions she now shares with her own children. These memories also provide "emotional inspiration" for her work.

"For all of these (memories), I can thank Mickey Mouse," she says.

The photographer tells Babble that each image was created in painstaking detail (with help from Sew Trendy Accessories and Off My Hooks) in order to capture the essence of each Mickey Mouse persona. According to Marie, it takes a village to create each photo, which includes hand-sewn costumes and custom-made props.

"There are so many moving parts that need to line up just perfectly," says Marie.

So, without further ado, let's take a look at some of the outfits that made Mickey's most well-known film and TV appearances so memorable!

Steamboat Willie was the cartoon that marked Mickey Mouse's official film debut, and it was also the first Disney cartoon to use synchronized sound. Mickey Mouse looked absolutely charming in his classic shorts and hat.

This was the first Mickey Mouse film to be produced in color. In this appearance, Mickey played a bandleader. Wearing a formal marching band outfit and hat, he definitely looked the part!

Copyright Disney. Photo by Belly Beautiful Portraits for Babble
3. Brave Little Tailor (1938)
Mickey Mouse starred in the title role of this fairytale adaptation, in which he sported a green hat with a red plume, along with a blue shirt over his shorts. Of course, he wouldn't have looked like a true tailor without his scissors.

Copyright Disney. Photo by Belly Beautiful Portraits for Babble
4. Fantasia - "The Sorcerer's Apprentice" (1940)
Both the 1940 original film and Fantasia/2000 included the segment "The Sorcerer's Apprentice," which featured Mickey Mouse as the hapless apprentice to sorcerer Yen Sid. In the film, he had a hard time recreating his master's tricks, but in his oversized wizard hat and cloak, he looked adorable doing it!

Copyright Disney. Photo by Belly Beautiful Portraits for Babble
6. Mickey's Christmas Carol (1983)
Dressed humbly in a red patched coat and tan scarf, Mickey Mouse played Scrooge's employee in this version of the classic Charles Dickens story. It was even nominated for an Academy Award that year for Best Animated Short Film.

Copyright Disney. Photo by Belly Beautiful Portraits for Babble
8. Mickey Mouse Clubhouse (2006)
Mickey's modern-day look is also his simplest! His classic outfit has been seen everywhere, but notably on Disney Channel's Mickey Mouse Clubhouse, where he appears with some of his favorite pals.