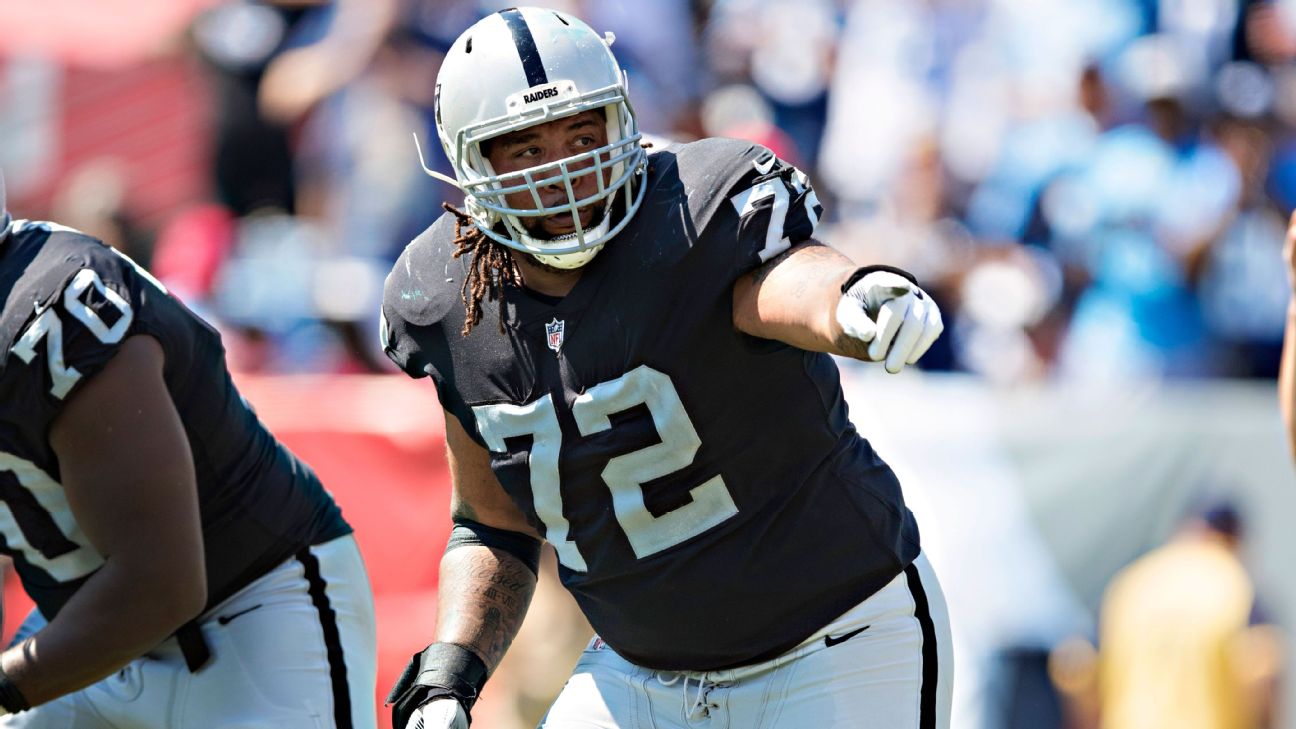 "Hopefully we'll get him back late in the season," said Raiders coach Jon Gruden.

Teams can bring back as many as two players off IR, and defensive tackle Justin Ellis is also a candidate.

While the Raiders signed offensive tackle Ian Silberman off the Tennessee Titans' practice squad, Gruden said third-round draft pick Brandon Parker would start at right tackle at the Los Angeles Chargers this weekend.Silberman was on Oakland's active roster last December and started two preseason games at right tackle this summer before making the team's initial 53-man roster and being waived a day later.

With first-rounder Kolton Miller at left tackle, it will be the first time the Raiders start two rookies at the offensive tackle positions since at least the 1970 AFL-NFL merger, per the Elias Sports Bureau.

ESPN Stats & Information found that since 2007, five different teams have started rookie offensive tackles in a game, and the Raiders would be the third team to start rookie tackles picked within the first three rounds:

Parker, who missed time in training camp with an ankle injury, said earlier this week that Penn gave him "pointers" on the sideline after he replaced him against the Browns and former No. 1 overall pick Myles Garrett.

"That man's strong," Parker said of Garrett. "I actually went on the bench and asked Kolton, 'Why didn't you tell me he was that strong?' He said, 'You didn't see me get bull-rushed all game?' Yeah, he's strong."

In Penn, the Raiders are losing the services of a three-time Pro Bowler who entered the NFL in 2004 as an undrafted rookie out of Utah State and had a streak of 170 consecutive starts end last year with a Lisfranc injury to his right foot in Week 15.

Penn, who held out of training camp in 2017 and received a contract extension, restructured his deal in camp this year, as his $3 million base salary for 2018 became fully guaranteed. He moved from left to right tackle this season.

"Obviously, I love Donald, so I'll miss him for however long that is," said Raiders quarterback Derek Carr. "With Brandon, I think everyone knows how we feel about him around here -- he's really good. I'm sure he had a couple plays as a rookie that he'd want back, but you live with that. He's tough, he's very intelligent, so crazy looks and things like that aren't going to mess with him. Which is good. He's one of the smartest rookies I've ever been around."

Miller, the No. 15 overall pick, has played all 288 snaps for Oakland's offense thus far for an offensive line that has allowed pressure on 24 percent of dropbacks, the seventh-lowest rate in the NFL, per ESPN Stats & Information.

"We know how Kolton is -- Kolton's awesome, he's a stud," Carr added. "You don't feel like you have two rookies because they're so talented, but at the end of the day, they are. It's something we've got to do a good job of just helping those guys out."
Report a correction or typo
Related topics:
sportsespnnfldonald pennoakland raiders
Copyright © 2021 ESPN Internet Ventures. All rights reserved.
TOP STORIES
Booster appts. canceled as pharmacies run out of COVID vaccine
How SFO is working with CDC in preparation for omicron variant
Authorities admit WC Nordstrom theft suspect released by mistake
Chris Cuomo suspended from CNN after AG releases documents
ABC7's Day of Giving: How to help in your community
Woman detained after running onto tarmac at LAX
Authorities: Student kills 3, wounds 8 at Michigan school
Show More
Intimate texts cast doubt on Holmes' claim of ex-COO's abuse
CDC says HIV is still disproportionately affecting these groups
Bay Area leading race to produce COVID variant omicron's DNA
Evander Kane reports to Barracuda after being waived by Sharks
FDA health panel endorses Merck COVID-19 pill
More TOP STORIES News