John Calipari: We need to be tested 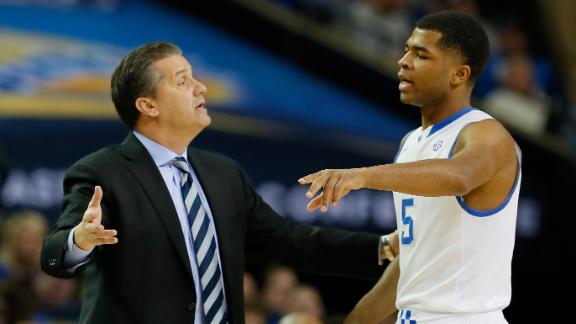 LEXINGTON, Ky. -- Willie Cauley-Stein said the fan bases for Kentucky and Louisville truly hate one another. And that's why he anticipates an extremely hostile YUM! Center when No. 1 Kentucky visits No. 4 Louisville on Saturday in the undefeated Wildcats' first true road game of the season.

"It's loud, it's a really fun environment because they hate us," Cauley-Stein said Friday afternoon. "It's fun to play in those conditions. It just makes the game that much more passionate. It's not dull. It's not quiet. It's going to be loud the whole time.

"They hate us, though. I guess that's just how rivalries are. It goes both ways. Our fans hate them."

TeammateAndrew Harrison agreed with Cauley-Stein and said he's not certain why Louisville supporters have so much disdain for Kentucky.

"It's kind of ridiculous, really," Harrison said. "It comes with the territory. ... I don't feel like I ever did anything to them. It's fine. When you say rivalry, I understand."

Coach John Calipari has won six of seven matchups against Louisville during his time at Kentucky. And his team is favored Saturday.

He said he's excited to see how the Wildcats (12-0) respond to the environment.

"We need somebody to punch us in the face," Calipari said. "Now let's see if we can still have fun. Can we enjoy this? If we're a world-class team, you enjoy this even if they're coming after you. It's going to be a tough game for us. We know that."

Per the polls that were released on Monday, Louisville (10-0) is the last team on Kentucky's remaining schedule that's currently ranked. But players and coaches squashed any talk about going undefeated in the buildup to Saturday's big game.

"It's too early to tell," Cauley-Stein said. "We're in December still. We got a lot of games ahead of us. That's not one thing we're thinking of."

Calipari Expecting Tough Game Against Louisville
Andrew Harrison and John Calipari comment on No. 1 Kentucky's upcoming matchup against No. 4 Louisville.

Journey To The Tourney: Kentucky vs. Louisville
Seth Greenberg previews the bluegrass showdown between Kentucky and Louisville, Saturday at 2 p.m. on ESPN2 and the WatchESPN app.