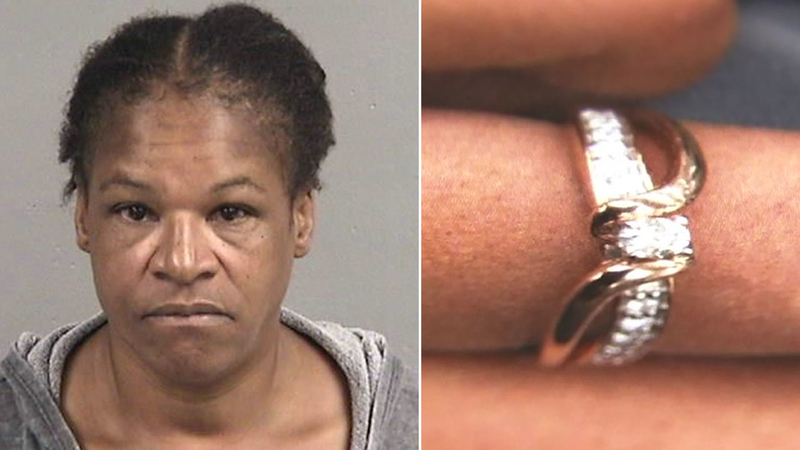 ABC7 News first brought you the story of Yessenia Trujillo and her fiancé Mateo Rincon back on October 13, shortly after the ring went missing.

Trujillo was working at a Jack in the Box on Lewelling Boulevard when she put her ring in a bag and set it down on a chair.

RELATED: Woman pleads for return of engagement ring after theft caught on camera in San Leandro

Investigators say surveillance video captured Karen Cotton draping her jacket over the backpack and then later picking up the jacket and the backpack.

Police were able to track down Cotton Friday but when they asked her to hand over the ring, she refused to cooperate with investigators.

"We were hoping to find some compassion in the suspect, hoping that she would at least help us locate and return the engagement ring to the young woman," said San Leandro Police Lieutenant Isaac Benabou.

"I have seen many theft suspects do what is right and return the property to the victims, but not Karen Cotton. This suspect showed no compassion or remorse for stealing the young woman's engagement ring."

But the couple's story already has a happy ending. When ABC7 News Anchor Dion Lim first reported on that theft, Khoren Ekmekijian, owner of Ritz Jewelers in San Francisco, came forward and remade the couple's ring for free.

Dion got to be there and document the big surprise.

"He's like a total angel. Who came and rescues us," said Trujillo after the big reveal.

"I thought I mean, we couldn't afford another ring, it's so special, thank you."

As to why Ekmekijian decided to help the couple, he told ABC7 News that the young immigrant couple reminded him when he was just starting out as a young immigrant, working to build his own American dream.

Police say Cotton will be arraigned next week at Alameda County's East County Courthouse in Dublin.