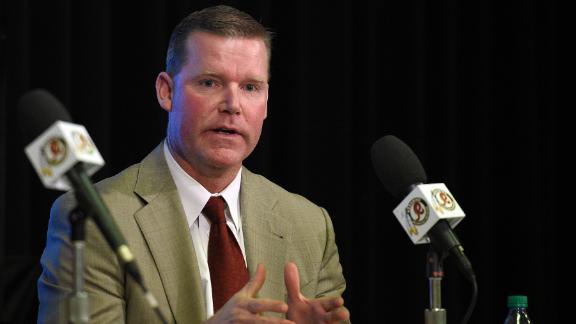 ASHBURN, Va. -- His past led others to want him, yet also scared others into wondering what they'd get. It's what Scot McCloughan knows he must face: He helped build a strong roster in San Francisco and had a say in Seattle's. He also recently admitted to having had drinking issues while holding both jobs.

Now he's back in charge of an NFL team and eager to move forward, returning to a path that was interrupted twice.

The Redskins hired McCloughan, introducing him at a news conference Friday as their new general manager. After signing up for the scouting service that he started following his departure from Seattle before the 2014 draft following a four-season run, the Redskins soon let him know they might be interested in hiring him. But the talks intensified last week.

Both sides wanted to make sure the time was right. And McCloughan said he was eager to return, knowing the off-field problems he's endured. It was a topic of conversation with owner Dan Snyder and president Bruce Allen, whom McCloughan has known for years. McCloughan met with Snyder for six hours earlier in the week.

"I'm not ashamed about it," McCloughan said of his off-field issues. "I went through a tough phase in my life, with my family. And I'll just tell you this: I grew professionally and personally. It's gotten me ... to be able to do this job. If I didn't think I could do it, I would not put Bruce or Dan in this situation whatsoever."

It came up during his interview with Snyder.

"He grilled me pretty good, and I was expecting it -- and I'm glad he did, you know?" McCloughan said. "I want him to know who he's getting as well."

McCloughan was San Francisco's vice president of player personnel from 2005 to 2008 and then general manager until March 2010, in charge of five drafts that produced a combined 19 Pro Bowl selections. His personnel moves during this time resulted in 13 of San Francisco's 22 starters in the 2011 season, which ended in the NFC Championship Game.

But in 2008 he had a stay at the Betty Ford Center for his alcohol issues.

"I learned a lot from it both professionally and personally," McCloughan said. "It made me a better father. It will make me a better personnel guy because I've been through it. Honestly, I'm glad I went through it to realize who I am and what I have to be and for me to be the best I can be is to not live in the past, live in the future and go forward."

Allen said the Redskins were well aware of McCloughan's struggles.

"I did talk to him about it and we had a very forthright conversation and we're here to support him," Allen said, "and he would not be taking this job if he thought this would be a concern."

What the Redskins need from McCloughan is the insight that helped him build those Niners teams -- and the input that aided Seattle as well, where he served as a senior executive. In Washington, both he and Allen said he'll have control over the 53-man roster.

It's a new setup for Washington, which had Allen as the general manager and president this past season. Former coach Mike Shanahan had final say the previous four years. And before that Vinny Cerrato was the main personnel guy, but his track record was not nearly as accomplished as McCloughan's.

"I have final say," McCloughan said. "But again, it's not going to be all about me. It's going to be a whole process and we'll come to a conclusion 99 percent of the time on the same person.

"I think [Allen] understands my track record. Again, it's not all about me. It's me being able to surround myself with good people to help me with personnel."

McCloughan said he will keep Washington's scouts through the draft and then decide if he wants to make any changes. He might have input, but he is not involved in the Redskins' search for a defensive coordinator. McCloughan has a relationship with ESPN analyst Jon Gruden but had never met Redskins coach Jay Gruden until Thursday.

And McCloughan's focus on the draft differs from previous offseasons, when the Redskins were more known for their free-agent spending.

He also understands why the Redskins have been surrounded by drama in recent years.

"Well, if you're not winning games, there's turmoil everywhere," said McCloughan, who got his start in Green Bay under former general manager Ron Wolf. "That's just common knowledge. It's just the fact that me being an outsider coming in, like I said -- I knew Bruce, but just to sit down with Dan, to sit down with Jay yesterday -- this place is right. This is my fourth organization, and like I've said, I've been around a couple of really good ones, but this place is right. It's set to go in the right direction."

That direction may begin with quarterback Robert Griffin III. McCloughan said he would like to give the quarterback more time to develop.

"One thing he did do, he took a team to the playoffs as a rookie and that's hard to do for any quarterback," McCloughan said. "You don't give up too quick on him because you know there's ability there."