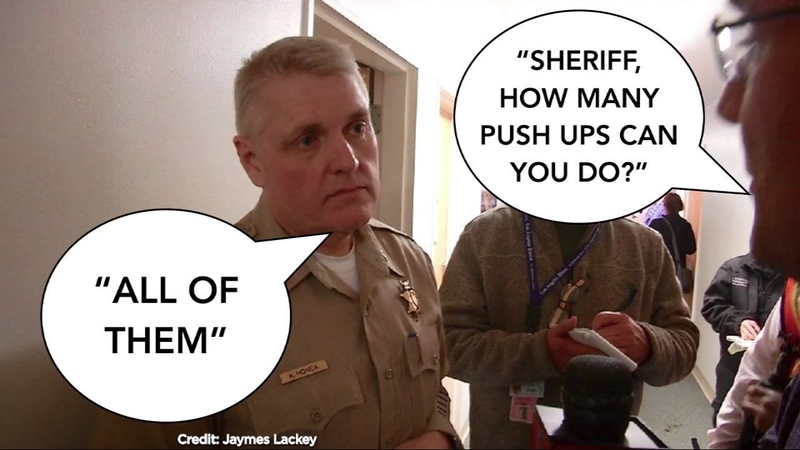 OROVILLE, Calif. (KGO) -- In the middle of one of our state's deadliest disasters, the sheriff of Butte County has become an internet sensation. Several memes about the sheriff started popping up on the internet. Some came from an Instagram account called Honea is my Homie and others came from a pastor who just wanted to say thank you.

Pastor Jaymes Lackey of Oroville posted a meme on his Facebook page reading "In Honea We Trust" as a tribute to Butte County Sheriff Kory Honea.

Honea is revered in the community, especially after how he responded to last year's Oroville Dam crisis.

"Just the way he carries himself and the way he talks, poise and compassion and um you can just tell he's dedicated," the pastor told ABC7 News.

The first meme received so many likes he created another one of the sheriff wearing a cape and the pastor knew he was on to something. The "Honea is my Homie" Instagram account has over a thousand followers.

Pastor Lackey says it's not his but he appreciates the meme movement spreading, "There's lots of other people jumping on board with this, it's been great. Trying to spread smiles in the middle of a hard situation you know."

Pastor Lackey has been busy creating his own memes due to high demand, like "Santa Claus is worried about being on his naughty list" and "monsters check under the bed for Honea" and a spoof on the movie "Taken."

RELATED: A Santa Rosa company is turning a like on social media into help for Camp Fire victims

Pastor Lackey says the memes are a way of coping saying, "this has just been a way to bring some uh light and levity to a very hard situation in our community."

Even the Butte County Sheriff's office has caught on. Inside the 911 dispatcher's office, the board is covered with the memes.

Pastor Lackey says he doubts the sheriff will say anything, and that's perfectly fine, "He has not said a word about it, and he's the type of guy that would deflect all the praise he's getting, but we just hope it brings a small smile to his face as well."