Fans gearing up for Sunday's NFC Championship between 49ers, Packers at Levi's Stadium in Santa Clara

KGO
By Julian Glover
SANTA CLARA, Calif. (KGO) -- Excitement is building in Santa Clara as the San Francisco 49ers get ready to take on the Green Bay Packers in the NFC Championship at Levi's Stadium. Kickoff is set for 3:40 p.m. on Sunday.

You only own a jacket like this when you're making a statement.

NOW I know what you guys mean by The Faithful.

Craay made the trip down from the Central Valley for her nieces dance competition this weekend that just happens to be at a Santa Clara hotel.

She said she came for the competition, but is staying for the NFC Championship game. Craay doesn't have a ticket, but she says she'll likely tailgate with The Faithful.

The team is reporting a sold out Levi's stadium and you can expect the parking lot to be packed full of Niners fans.

Shelton Meadows is one of those fans putting the "faith" in faithful.

A big game like the NFC Championship at Levi's means big business for Santa Clara. It will be a busy day for bars and restaurants.

"Every game's been rocking here, lots of Niners fans" said Patrick Brioso, manager of Smoke Eaters just minutes away from the stadium.

Business is even up for Berkeley based beer company Fieldwork.

Delivery driver Daniel Grant said orders and deliveries are up "30%" thanks in part to the Niners Gang.

Craay is hoping for the 49ers to punch their ticket to Super Bowl LIV with a win over the Packers.

"I want to get one more patch and I want it to say 2020 super bowl," she said.
Report a correction or typo
Related topics:
sportssanta clarasan francisco 49ersnfc championship gamesportsgreen bay packers
Copyright © 2020 KGO-TV. All Rights Reserved.
NFC CHAMPIONSHIP GAME 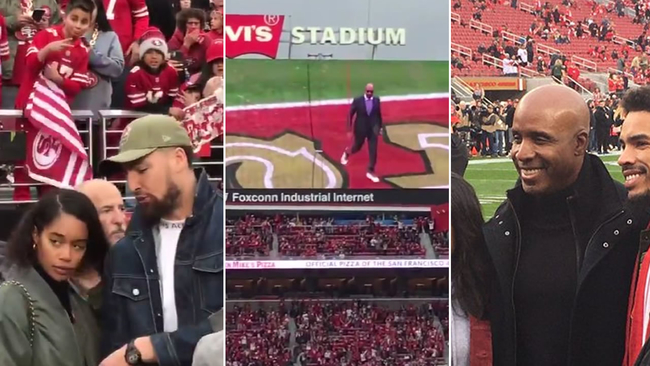