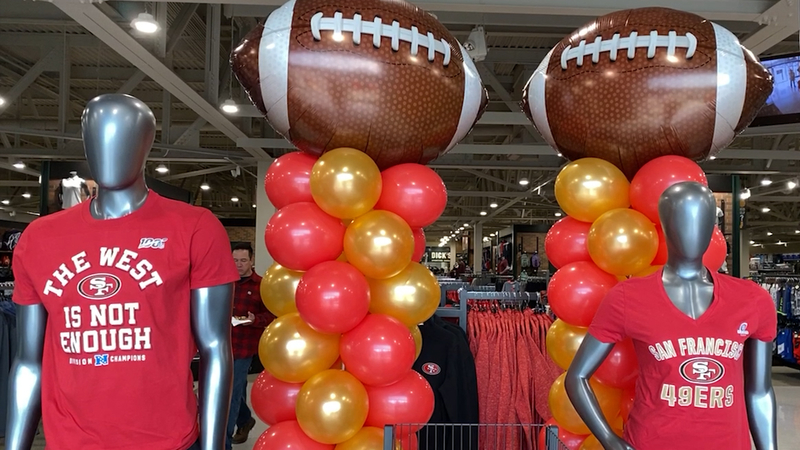 SANTA CLARA, Calif. (KGO) -- Levi's stadium is going to be packed this weekend for the NFC Championship Game between the San Francisco 49ers and the Green Bay Packers, but the team store has been packed all week long.

Friday was no exception as everyone is trying to get their last minute fan gear ready for Sunday.

Gear has been flying off the shelf here at the stadium store, with many items selling out.

The most popular items that have been selling like crazy are Jimmy G jerseys, @49ers helmets and, of course, anything @gkittle46. But there is still plenty of other gear to choose from. pic.twitter.com/WY2kmWpip8

Plenty of popular choices like Jimmy Garoppolo jerseys, game helmets, just about anything George Kittle and of course cold weather gear to be ready for the game.

But with so many items to choose from, the Faithful are buying just about everything to rep their team.

Now, of course, if all goes well for the 49ers this weekend, fans will be back at the team store getting their NFC Champions gear.

RELATED: A sign from above appears at Candlestick before NFC Championship game

If you're not lucky enough to be at Levi's Stadium on game day on Sunday at the team store, you can always go right down the road to select Dick's Sporting Goods locations across the Bay Area.

"We're starting to accumulate that now in hopes that they are actually going to clinch that victory," Dick's Sporting Goods Community Marketing Manager Amy Vanderline said. "But we won't release it until the actual win. So we have to get that win."

Meanwhile, @dickssportingss stores across the Bay Area are getting in #49ers NFC Championship hats and shirts in anticipation of a possible win this weekend for the team. 8-10 stores across the area will be open late Sunday and early Monday to sell fans their piece of history. pic.twitter.com/2sGNPqKmCW

Select stores, including the Great Mall location, will be staying open on Sunday night and opening early on Monday to get fans their championship swag.

These Dick's stores have had their share of practice for championship excitement thanks to the recent success of the Golden State Warriors.

"It obviously preps us for the madness that is about to occur.," Vanderline said. "We've all been through this a few different times. It just makes us that much more excited to celebrate a different team in the Bay."

Now all that's left to see is if San Francisco can give the fans what they want and bring the NFC crown to the Bay Area.

LIST: Where to get your 49ers Championship Gear late Sunday 1/19 and early Monday 1/20 at Dick's Sporting Goods: