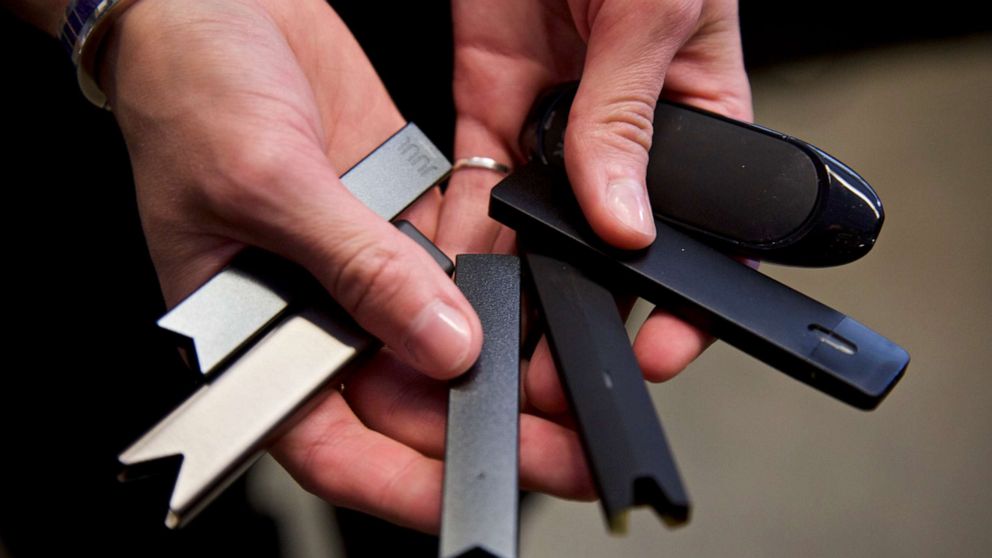 ABCNews
By WILLIAM MANSELL
As vaping-related illnesses and deaths continue to climb, the Centers for Disease Control and Prevention is vowing to work with state and federal agencies to figure out what is causing illnesses in e-cigarette users.

"We are working around the clock to find out what is making people sick," Ileana Arias, the CDC's acting deputy director of non-infectious diseases, told reporters Friday. "The focus of the investigation is narrowing, but we are still faced with complicated questions in this outbreak."

A fourth person has died from an e-cigarette-related lung illness the CDC said, and Los Angeles County Officials announced the death of a fifth person.

The CDC also said the agency is aware of 450 possible vaping-related cases in 33 states, including 215 that have been previously reported. While vaping has been around for more than a decade, the CDC said the recent spike in illnesses started around May or June of this year.

The Los Angeles County Department of Public Health said it's investigating the county's first known death tied to e-cigarette use. Officials said there are 12 known cases of pulmonary illnesses related to vaping in Los Angeles County.

"Stop vaping now, until further information in what is causing lung damage and death can be understood," Barbara Ferrer, director of the Los Angeles County Department of Public Health, said a press conference Friday.

Muntu Davis, a health officer for the Los Angeles County Department of Public Health, echoed Ferrer's comments, saying with the number of illnesses and deaths linked to vaping, it appears risky.

"If you don't have to vape, don't do it right now," Davis said Friday. "It's wise to stay away from this."

Ferrer also asked e-cigarette companies to stop advertising -- that it's not an appropriate time to advertise when legitimate questions regarding product safety arise.

"We would like to ask the producers of vaping products to cease their advertising while we figure this out," Ferrer said.

"The tragic loss of a Hoosier and rising number of vaping-related injuries are warnings that we cannot ignore," State Health Commissioner Dr. Kris Box said in a statement. "While it is unclear what substances are causing injury when you use these products with other chemicals, you may not know everything that you're inhaling and the harm it can cause."

The Food and Drug Administration said it's collected 120 e-cigarette samples with the hope of finding a common device or substance that is causing the pulmonary illnesses.

"The FDA is analyzing these samples for the presence of a broad range of chemicals," Mitch Zeller, director of Center for Tobacco Products at the FDA, said on a conference call Friday.

"As Acting Commissioner of the FDA, you alone have the power to stop this vaping epidemic, which has now reached the point where children and young adults are getting sick and dying," Durbin said in a statement. "It is my strong belief that, if you do not take decisive action within the next 10 days, you should resign your post. If you continue to refuse to do your job -- which is to protect the public health -- then it is time to allow someone else to take the helm."

While there is not a specific device or chemical linked to all cases, the CDC reports that a majority of the patients are aged 18 to 35, male and admit to using THC, nicotine, or both, about 90 days before seeing symptoms.

CDC officials said symptoms include shortness of breath, gastrointestinal issues, fever and fatigue. In all reported cases of vaping-related illnesses, abnormalities were observed in both lungs after examination, and no infections were detected, the CDC said.

The CDC's Dana Meaney-Delman said it's troubling so many healthy, young people are becoming ill. E-cigarettes are never safe for youth, young adults and pregnant women, she said during a call with media members on Friday.

Complicating pinpointing what's leading to the illnesses is the fact many who vape buy products off the street, not from manufacturers.

A few labs and states are testing to see if illnesses are related to vitamin E acetate. On Thursday, the New York State Department of Health said laboratory results showed "very high levels of vitamin E acetate in nearly all cannabis-containing samples." A vape product containing vitamin E was linked to each patient who submitted a product for testing, state officials said.

However, during Friday's press briefing, the FDA and CDC said there has been a wide mix of results in tests and "no one substance or compound, including vitamin E, has been identified in all the samples tested," according to Zeller.

Other vaping-related deaths were reported in Minnestoa, Oregon and Illinois.

Minnesota announced the death of a patient due to a serious lung injury related to vaping Friday afternoon. According to the state, the patient was older than 65 and died "after a long and complicated hospitalization."

"Our sympathies go out to the family of the person who died," Gov. Tim Walz said in a statement. "This tragedy and the serious injuries suffered by others show the stakes of this outbreak."

The CDC launched a multi-state investigation into the lung illnesses on Aug. 1. The FDA is asking the public to visit the site safetyreporting.hhs.gov to report any health concerns regarding e-cigarette use.

JUUL Labs, the most popular U.S. producer of e-cigarettes, said in a statement to ABC News that it's "been monitoring the situation closely."

"To be clear, the ingredients of our products do not include THC, any compound derived from cannabis, or vitamin E compounds like those found in THC products," a company spokesperson said. "We appreciate the work of the CDC, FDA and other public health authorities and are confident that they will get to the bottom of this issue."
Report a correction or typo
Related topics:
abc newsnational
Copyright © 2020 ABC News Internet Ventures.
More Videos
From CNN Newsource affiliates
TOP STORIES