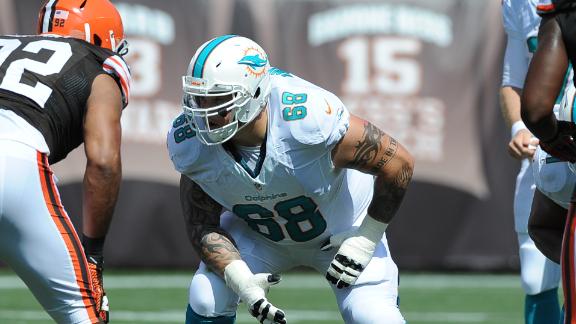 Buffalo Bills owners Terry and Kim Pegula, as well as general manager Doug Whaley and coach Rex Ryan, are convinced that Richie Incognito's past troubles are behind him after meeting with the 10th-year guard last week.

"Obviously, we all discussed Richie's past experience in the NCAA and NFL," Terry Pegula said in a statement Monday. "We are convinced that Richie is prepared to move forward and has and will continue to take the necessary steps to improve himself as a person and a teammate.

"Following discussion with the rest of the coaching staff, we as an organization will provide him with the opportunity to do so."

The Bills officially signed Incognito on Monday, the team announced. The one-year deal is for $2.25 million, a source told ESPN.

Buffalo was in need of an upgrade at guard, where starters Erik Pears and Kraig Urbik both struggled last season. Pears will become a free agent in March, while Urbik is under contract through 2016.

Guard Chris Williams, who signed a four-year, $13.5 million deal last offseason but missed 13 games with a lower back injury, told ESPN in December that he expects to be healthy enough to play at the beginning of next season.

Incognito, 31, last played for the Miami Dolphins in 2013 before being suspended for the final eight games of that season as a result of a high-profile bullying scandal involving former Dolphins teammate Jonathan Martin.

An NFL investigation revealed that Incognito and two other Miami offensive linemen -- John Jerry and Mike Pouncey -- harassed Martin, who was later traded to the San Francisco 49ers.

The NFL cleared Incognito last summer to resume all football-related activities. He had visits with the Tampa Bay Buccaneers in August and Denver Broncos in November but remained out of football for the 2014 season.

Incognito has nine seasons of NFL experience and briefly played for the Bills in 2009.

He had established a reputation for having a mean streak even before the bullying scandal. Bills defensive tackle Marcell Dareus once called Incognito "the dirtiest player in the NFL" following a game against Buffalo's AFC East rival Miami.

Incognito was selected by St. Louis in the third round of the 2005 draft. He failed to sign a contract with the Rams until Week 3 of his rookie season and then missed the rest of the year after being placed on the team's non-football injury list.

He spent the next three-plus seasons in St. Louis before wearing out his welcome. The Rams placed him on waivers, and he was claimed by Buffalo. He played three games with the Bills but was not re-signed. Overall, he has appeared in 102 games.