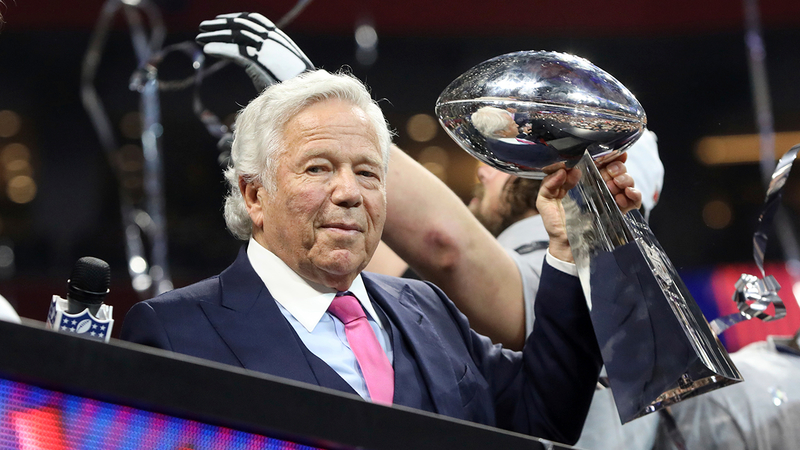 The 77-year-old Kraft was chauffeured to the Orchids of Asia Day Spa in a 2014 white Bentley on the evening of January 19, when police say they videotaped him engaging in a sex act and then handing over an undetermined amount of cash, Jupiter police said in charging documents released by the Palm Beach State Attorney's Office.

Investigators said Kraft was back at the spa 17 hours later, arriving at the upper-middle class shopping center where the spa was located in a chauffeured 2015 blue Bentley, the documents said. He was videotaped engaging in sex acts before paying with a $100 bill and another bill, police said.

Kraft, whose team won the Super Bowl earlier this month, has denied wrongdoing.

State Attorney Dave Aronberg said Kraft will be issued a summons that is similar to a traffic ticket and assigned a day to appear in court. Most people charged for the first time with soliciting are eligible for a diversion program where they pay a small fine, perform 100 hours of community service and attend a class where they learn about the dangers of prostitution and how it is often tied to human trafficking.

Kraft and 24 other men were charged last week with soliciting a prostitute as part of a crackdown on sex trafficking.

Jupiter Police Chief Daniel Kerr said he was shocked to learn Kraft -- who is worth $6 billion -- was allegedly paying for sex inside a strip-mall massage parlor.

"We are as equally stunned as everyone else," Kerr said.

The charge comes amid a widespread crackdown on sex trafficking in the area surrounding Palm Beach County. About 200 arrest warrants have been issued in recent days, and more are expected.

Authorities investigated the parlors for months, gathering enough evidence through observation, interviews with men stopped leaving the spas, trash bin searches and surveillance of their owners. Judges then issued warrants allowing them to secretly install cameras inside the spas to record what transpired.

In a statement, a spokesperson for Kraft said they "categorically deny that Mr. Kraft engaged in any illegal activity. Because it is a judicial matter, we will not be commenting further."
Aronberg steered a Monday news conference away from Kraft's specific case to the larger issue of human trafficking, though no human trafficking charges have been filed against Kraft or any of the other defendants connected to the massage parlors.

"The larger picture, which we must all confront, is the cold reality that many prostitutes in cases like this are themselves victims, often lured to this country with promises of a better life, only to be forced to live and work in a sweat shop or a brothel performing sex acts for strangers," Aronberg said.

Multiple law enforcement agencies were involved in the prostitution/human trafficking operation, including Homeland Security, the IRS, Jupiter police, the Palm Beach Sheriff's Office and others.

Authorities say the women accused of running the sex trafficking ring were operating out of local spas that claimed to be massage parlors. Ten spas have been closed, and several people have been taken into custody on sex trafficking charges.