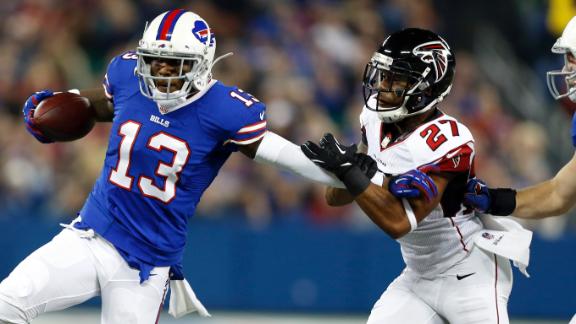 ORCHARD PARK, N.Y. -- Receiver Stevie Johnson is heading to his hometown San Francisco 49ers after being the odd man out in Buffalo.

The Bills traded Johnson to the 49ers on Friday in a deal made before the start of the second round of the NFL draft. In exchange, Buffalo announced it acquired an undisclosed pick in next year's draft. The pick is a conditional fourth-rounder that can become a third-rounder, sources told ESPN NFL Insider Adam Schefter.

The deal was made a day after the Bills traded up five spots to select Clemson receiver Sammy Watkins with the fourth pick in the NFL draft.

Watkins' addition was the latest in a series of moves the Bills have made to restock their receiver position, and it led to Johnson being expendable after six seasons in Buffalo. The Bills also acquired receiver Mike Williams in a trade with Tampa Bay last month. Last year, Buffalo used second- and third-round picks to draft Robert Woods and Marquise Goodwin.

Johnson left Buffalo on Thursday, when he was spotted on a flight that landed in Las Vegas about an hour after Buffalo drafted Watkins.

"Today's decision was not an easy one to make, especially involving a player like Stevie, who leaves everything he has on the field and is an emotional leader in our locker room," Bills general manager Doug Whaley said. "All of the decisions we make are done so in the best interest of our team."

The 49ers, by comparison, had a need for receiver and were expected to address the position in the draft. San Francisco instead gained an experienced player in Johnson after losing Mario Manningham in free agency.

Johnson spent the past four seasons as a starter in Buffalo. He became the Bills' first player to break 1,000 yards receiving in consecutive seasons in 2010-11, and extended the streak in 2012.

Johnson's numbers dropped last year, when he finished with 52 catches for 597 yards in 12 games. Aside from being slowed by an assortment of injuries, he was excused by the team for the final two games of the season following the death of his mother.

Johnson is from San Francisco and played college at Kentucky. The Bills selected Johnson with the second of three seventh-round picks in the 2008 draft.

At 6-foot-2 and 207 pounds, Johnson can play on the outside, but is best suited to play an inside slot position.

Johnson is known for his outgoing personality and colorful touchdown celebrations that have, on occasion, gotten him into trouble.

Former Bills coach Chan Gailey benched Johnson for the final three quarters of Buffalo's 2011 season finale. The discipline occurred after Johnson was penalized a second time that season for an excessive touchdown celebration.

The Bills, who haven't made the playoffs in 14 seasons, are counting on Watkins to add a dynamic threat to an offense that lacked consistency last season under rookie quarterback EJ Manuel. Whaley acknowledged the risk he took with a "win-now" approach by giving up a No. 9 pick this year, plus a first- and fourth-round pick next year in a trade with Cleveland to select Watkins.

That's fine with Watkins, who arrived in Buffalo earlier in the day.

"Throughout my whole life I've had high expectations of myself," Watkins said. "I can't wait to get it started."