David Perron on Joe Thornton hit: 'I think it's affected my life a lot' 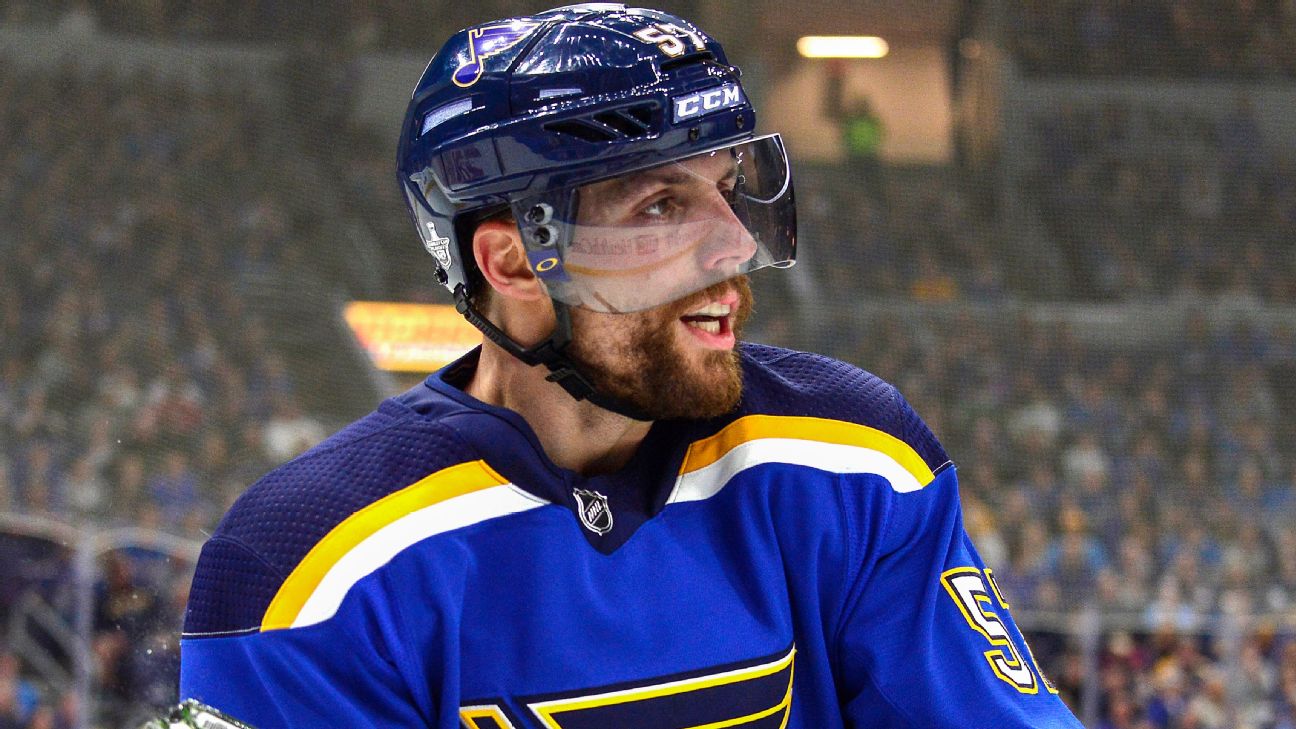 SAN JOSE, Calif. -- As the San Jose Sharks face the St. Louis Blues in the Western Conference final, much of the attention is on 39-year-old center Joe Thornton, who is chasing his first Stanley Cup championship in a career that began in 1997. Each round, there has been focus on that pursuit, Thornton's legacy in the NHL and the impact he has had on his franchise.

St. Louis forward David Perron says Thornton had an impact on his career, too. Though not exactly a positive one.

On Nov. 4, 2010, Thornton made contact with Perron's head on a huge hit in the neutral zone. Perron was carrying the puck after a pass out of the Blues' defensive end. Thornton had just emerged from the penalty box and collided with him. Perron dropped to the ice headfirst and was motionless.

The concussion he suffered on the play ended his season after just 10 games. He wouldn't return to action for the Blues until the following season, on Dec. 3, 2011. Thornton was given a major penalty and suspended for two games in a decision that was hotly debated around the NHL.

"I think about it all the time, because I think it's affected my life a lot. I really do think that," Perron told ESPN on Friday, on the eve of Game 1 between the Blues and Sharks in San Jose. "Other than that, I hope it's not going to be too much of a story right now. It's been a long time ago."

Perron and Thornton have competed against each other on numerous occasions since the incident, both in the regular season and the postseason -- including the 2018 series between the Sharks and Perron's Vegas Golden Knights. They met in the playoffs in 2012: Perron recalled getting some measure of vengeance when the Blues ousted the Sharks in five games, as Perron scored the winning goal in the clinching game.

"The next year, when I came back, we beat them in five games. I was thinking more about it then," Perron said. "But maybe after [this series], we'll see. I want to win. It doesn't matter if he's on the team or not."

He recalled Thornton reaching out to him after the incident. "He's really respected around the league. I really admire him as a player. The skills he has, when he passes the puck -- I always try to do some of those things, and it's not easy," Perron said.

"The way he plays was awesome. But I really didn't like that other part."

That concussion was the first major one of Perron's NHL career, but far from his last. The latest one cost him 24 games this season with the Blues.

"It's harder and harder every time," he told NHL.com. "It's so hard on the mental side of it to go through. Basically, you have some situations that heal up quicker, and some that linger and there's no reason why, and that's why it gets harder on you, it gets harder on your family. You start to wonder about other things and you get in your head a lot."

The hit remains one of the most contentious of the past decade. At the time, the NHL's "Rule 48" was newly introduced, banning "lateral or blind side hit to an opponent where the head is targeted." The Sharks and Thornton argued that the hit was a "north/south" one as Thornton stepped in front of Perron.

"I didn't intend to hurt or do anything bad to him," Thornton said at the time. "He kind of ran into me, to be honest with you. Last night and this morning I had about three dozen text messages from players around the league saying they can't believe I even got a penalty."

They also argued that the size disparity between the players was a factor -- Thornton, at 6-foot-4, is four inches taller than Perron.

"I guess being 5-9 was Joe's only solution to avoid this suspension," John Thornton, Joe's brother and agent, said at the time.

Perron was accused by some partisans of embellishing on the play, as he did return to the game after the hit. But he missed his next game for the Blues and, in the end, 97 total games until his return the following season.

"With head injuries, sometimes these symptoms show up a little later," John Davidson, the Blues' president at the time, said in 2010. "What's really disappointing is to know there were people out there actually being critical of him and questioning the validity of it."

A lot has changed in the nearly nine years since the hit. While "Rule 48" was in place in 2010-11, the NHL Department of Player Safety wasn't created until the following season. How the league deals with concussions has changed -- it's stomach-turning to think how quickly Perron returned to that game, knowing what we know now. How the league punishes hits that target the head has changed. And how the hockey world reacts to head injuries may have changed most of all.