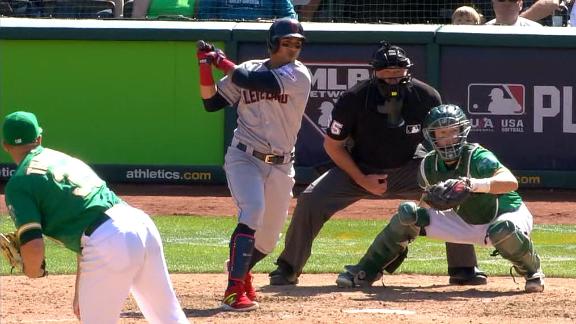 OAKLAND, Calif. -- The A's have had an entertaining homestand, with three walkoff wins and the majors' first no-hitter this season in a five-day span.

About the only thing that went wrong was All-Star closer Blake Treinen's franchise-record streak of scoreless innings ending with a blown save -- and manager Bob Melvin doesn't seem too concerned about that.

Matt Olson scored from third base when right fielder Jordan Luplow slipped trying to field Ramon Laureano's short fly in the ninth inning, lifting the A's over the Cleveland Indians 3-2 in a wacky, sloppy game Saturday.

"I wouldn't say we're playing our best baseball right now, but to be able to stick out these close games and come out with wins this week has been big," Olson said. "To be able to win those tight games when you're not playing your best is what good teams do."

Olson walked leading off against A.J. Cole (0-1), and Kendrys Morales followed with a single before both runners were sacrificed over. Laureano lofted an 0-1 pitch over the head of second baseman Jason Kipnis, who was running toward right field. Luplow appeared in position to make the catch but slipped on the grass and fell as the ball dropped in for a single, allowing Olson to score easily.

Luplow pounded his hands into the grass while Olson threw up his arms as the A's -- sporting their Kelly green jerseys -- bolted out of the dugout to celebrate a second straight walkoff win. Matt Chapman homered in the 12th inning to sink Cleveland on Friday.

Had Luplow made the catch, Olson would have stayed put.

"I was halfway down the line," Olson said. "It was so shallow, I wouldn't have been able to tag and score, so I got about halfway off in case it dropped."

Treinen (2-2) won despite blowing his second save of the season after allowing Leonys Martin's two-out, tying single in the top of the ninth. That ended a streak of 32 consecutive scoreless innings at the Coliseum, a record for an Oakland reliever.

"Blake has picked up this team so many times," Melvin said. "We were able to come back and pick him up.

Cleveland's defense, or lack thereof, made the difference.

Both of Oakland's first two runs were unearned.

Nick Hundley hit a Little League home run in the fifth inning, tripling and scoring on a throwing error by left fielder Jake Bauers. Hundley connected on a 1-1 pitch from Trevor Bauer and never stopped running as the ball ricocheted off the wall in left. Hundley slid into third, but Bauers' two-hop throw was wide and skipped past third baseman Jose Ramirez.

The A's scored their first run following a throwing error by Ramirez in the first.

"You know on the road it's hard. If you make a mistake you end up going home," Indians manager Terry Francona said. "That's two nights in a row and it hurts."

The two unearned runs were the only blot on an otherwise strong outing from Bauer. The Indians right-hander allowed two hits, walked three and struck out 10 in seven innings. It's the 13th time Bauer has reached double-digits in strikeouts since the start of last season.

Oakland won without hitting a home run for the first time in 15 games this season. The way the Indians played defense, the A's didn't need to.

Martin homered with two outs in the fifth after striking out in his first at-bat. Martin has struck out at least once in 20 consecutive games, the longest active streak in the majors.

Prior to Laureano's winning hit, Stephen Piscotty laid down a sacrifice bunt to advance both runners. It's the A's first sacrifice since Aug. 12, 2018. The 84 games in between sacrifices is the second-longest in major league history behind Toronto's 95-game streak 2002-03.

The A's will call up RHP Daniel Mengden from Triple-A Las Vegas to start Sunday's series finale. Mengden was 3-2 with a 2.77 ERA in seven starts in the minors this season. RHP Jefry Rodriguez (1-2, 2.41) stars for the Indians. Rodriguez allowed two runs in six innings but lost against the Chicago White Sox in his previous outing.