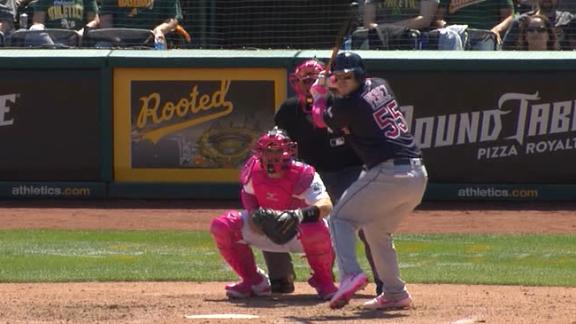 ESPN
OAKLAND, Calif. -- Cleveland manager Terry Francona acknowledges the Indians are still uncertain what they have in Jefry Rodriguez after acquiring the 24-year-old pitcher from Washington in November.

They like what they've seen so far from the 6-foot-6 right-hander.

Roberto Perez hit a three-run homer in the sixth inning to back Rodriguez's first win in the American League as Cleveland beat the Oakland Athletics 5-3 on Sunday.

"I thought he battled like crazy," Francona said. "We don't know him great yet. He is obviously a really intelligent, thoughtful kid and he's not backing down from anybody. With this much inexperience it's not always going to be perfect, but it's easy to feel like the glass is more full. That's a compliment to the kid."

Francisco Lindor had two hits for Cleveland. Mike Freeman walked three times and scored, Carlos Santana had an RBI double and Jordan Luplow singled, scored and drove in a run.

Rodriguez (1-2) allowed three runs in six innings. He gave up six hits and three walks with three strikeouts, and got the A's to hit into a pair of double plays.

"I just try to always focus on executing and go out there and give my best," Rodriguez said through a translator. "There is some more confidence having that routine and being a part of the team on a daily basis. It helps a lot to give your best stuff."

Cleveland won after dropping the first two games of the series on walk-off hits. The Indians didn't give the A's a chance for a third, taking a lead in the first inning and pulling away on Perez's fourth home run.

Carlos Gonzalez and Luplow reached on consecutive one-out singles against starter Daniel Mengden (0-1). After reliever Ryan Buchter retired Jake Bauers on a liner, Perez drove a first-pitch fastball deep into the left field stands. The ball left his bat at 110.7 mph and traveled a projected 424 feet.

"A couple of the guys were talking to me, Hey, be aggressive against this guy, he's going to try to steal a strike right away," Perez said. "I was being aggressive and I got it."

Rodriguez and three relievers made the lead hold up.

Adam Cimber struck out two of the three batters he faced. Nick Wittgren pitched the eighth and Brad Hand worked a 1-2-3 ninth for his 11th save. Hand bounced back after giving up a game-ending homer to Matt Chapman on Friday.

Matt Olson hit his first home run of the season for the A's. Olson was activated off the injured list Tuesday after missing the first 5 1/2 weeks recovering from right hand surgery.

Oakland finished 4-2 on its homestand.

"The offense still isn't where we expect it to be," manager Bob Melvin said. "It will come around. Now we go back on the road and hope the offense will pick up some."

Cleveland third baseman Jose Ramirez struck out, flied out twice and grounded into a double play. That ended his streak of reaching base in 20 consecutive games, which had been the longest in the American League.

THREE IN A ROW

A's catcher Josh Phegley has thrown out a runner in each of his last three games. It's the first time Phegley has done that since June 2015.

Athletics: DH Khris Davis singled twice in his return to the cleanup spot after missing three games with a bruised left hip. ... Chapman was rested.

Indians: RHP Shane Bieber (2-1, 3.32 ERA) is unbeaten in four road starts this season and will try to extend that streak Monday in Chicago against the White Sox. Bieber has walked two or fewer batters in five of his seven starts overall.

Athletics: Mike Fiers (3-3, 5.48) pitches Monday night in Seattle, starting for the first time since his second career no-hitter Tuesday against Cincinnati. Fiers lost to the Mariners on opening day in Japan.