Lillard confirms rib injury, won't use it as excuse

PORTLAND, Ore. -- Trail Blazers star Damian Lillard does not want to use his separated rib as an excuse for his struggles in the Western Conference finals.

Lillard confirmed on Sunday that he suffered the injury to his left side when Golden State Warriors center Kevon Looney fell on him during a scramble for a loose ball during the third quarter of Game 2. However, Lillard downplayed the impact of the injury on his performance in the series, which Portland trails 3-0.

Lillard has not been listed on the official injury report because there was never any doubt about his availability. Blazers coach Terry Stotts said he wasn't aware of the specifics of Lillard's injury until postgame reports Saturday night.

"I didn't really know much about it until it became public," Stotts said. "Generally when he has something going on, he kind of keeps it to himself, so I would say it's not surprising."

Lillard played with padding on his left side during in the Game 3 loss, when he scored 19 points on 5-of-18 shooting. He did not take any painkillers because he said they "mess with your stomach after the game."

Lillard credited the Warriors' defense for making it difficult for him to get in any rhythm as a scorer. Golden State is frequently double-teaming Lillard and blitzing him on pick-and-rolls, trying to force the ball out of his hands, and he acknowledged that he's been hesitant at times because of the Warriors' coverages.

"I'm seeing Draymond Green, and he's behind that kind of like tracking my movements, so it's like a next layer of defense that I'm paying attention to so whereas like I'm not, I guess, wanting to explode and get around that guy because I see what's waiting for me, and then just the crowd, and put myself in a tough position," Lillard said. "It's tough. They're doing a good job in their coverages." 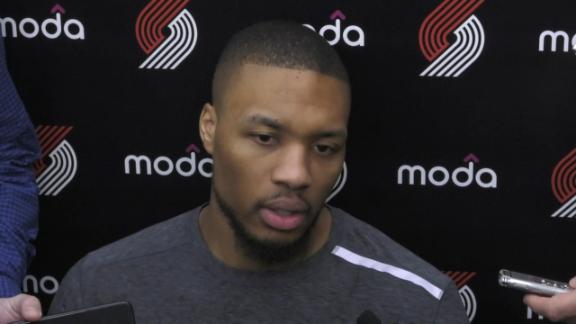