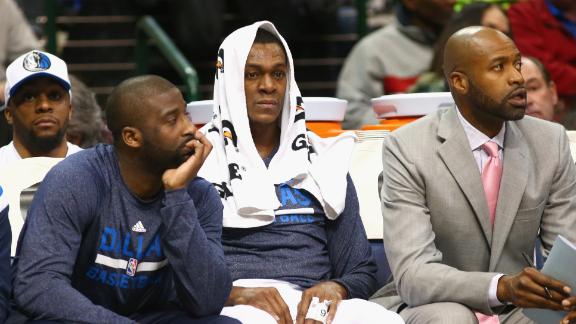 DALLAS -- Point guard Rajon Rondo did not play the final 20-plus minutes of the Dallas Mavericks' 99-92 win over the Toronto Raptors on Tuesday night after a profanity-laced shouting match with coach Rick Carlisle over play-calling responsibilities.

The incident occurred with 8:10 remaining in the third quarter, when Carlisle stormed out on the American Airlines Center court to call a timeout and shouted at Rondo, who appeared to be ignoring a play call from the bench as he brought the ball up the floor.

Rondo responded by shouting back at Carlisle. They exchanged heated words for much of the timeout, with assistant coach Jamahl Mosley at one point stepping in front of Rondo to prevent the point guard and coach from getting in each other's faces.

"Well, it's an emotional game, and we had a difference of opinion," Carlisle said. "There was an exchange, and then in my mind, it was over."

Rondo spoke with his former Kentucky coach Tubby Smith for several minutes in the Mavs' locker room after Tuesday's win but declined to take questions from reporters.

"Discuss with Rick," said Rondo, a four-time All-Star whom the Mavs acquired Dec. 18 in a blockbuster trade with the Boston Celtics.

Team sources told ESPNDallas.com that friction had been building between Carlisle and Rondo over play-calling responsibilities, the majority of which the coach has handled. Former Mavs point guard Jason Kidd had similar frustrations during his first season playing with Carlisle, although it never resulted in a public outburst.

Rondo, who has averaged 9.0 points, 6.2 assists and 2.9 turnovers in 25 games with the Mavs, brought the subject up when asked about his comfort level in the Mavs' offense after last week's loss to the Oklahoma City Thunder.

"I'm able to adapt and adjust to anything," Rondo said then. "Coach does a lot of the play calling, and just go from there."

Carlisle replaced Rondo, who has a reputation of being difficult to coach, with backup point guard Devin Harris after the timeout. Rondo watched the rest of the game from the bench.

Harris (14 points, 5 assists) and reserve guard J.J. Barea (13 points, 3 assists) played key roles in the Mavs' comeback win over the Raptors. Dallas trailed by nine points when Rondo, who finished with four points and four assists, had the shouting match with Carlisle.

Asked whether Rondo would be the starting point guard for Wednesday night's game against the Atlanta Hawks, Carlisle said, "That's what we brought him here for."

Carlisle, who has occasionally been frustrated by Rondo's tendency to commit turnovers on unnecessarily complicated passes, declined to say whether Rondo's benching was due to basketball or disciplinary reasons.

"It was made because I'm the coach, and that was the decision that I made at the time," said Carlisle, who also declined to explain his logic for benching Rondo during crunch time of a Jan. 23 home loss to the Chicago Bulls, a decision Rondo downplayed at the time.

"S--- happens. Not the first time, not the last time," Cuban told ESPNDallas.com. "It'll happen again. It's not just Rajon. It's a long season. In my 15 years, I've seen it happen more times than I can count, and we survive every time."

Nevertheless, face of the franchise Dirk Nowitzki acknowledged some concern about the heated exchange.

Center Tyson Chandler, who joins Nowitzki among the most respected leaders in the Mavs' locker room, hoped Carlisle and Rondo would address the issue with each other.

"I think it will make them have a conversation and move on," Chandler said. "The main thing is we stay together in the locker room and understand we're all trying to win and we're all in this together, from every player and every coach and everything else.

"Those two, they're two grown men. They can handle their problems with each other. As far as this team goes, everybody in this locker room has to be willing to win and wanting to win. And I know everybody here does want to win."

Neither Nowitzki nor Chandler gave a firm opinion on whether Rondo should be given more freedom to call plays.

"I think Rajon has been in this league a long time," Nowitzki said. "He knows how to play, and I guess he feels that he needs a little bit more leverage out there, but this is not for me to decide. It was a tight ballgame, and I guess, ultimately, the coach has the last word."

Rondo Benched After Shouting Match
Rajon Rondo got into a shouting match with coach Rick Carlisle and was benched for the final 20-plus minutes of the Mavs' win over the Raptors.