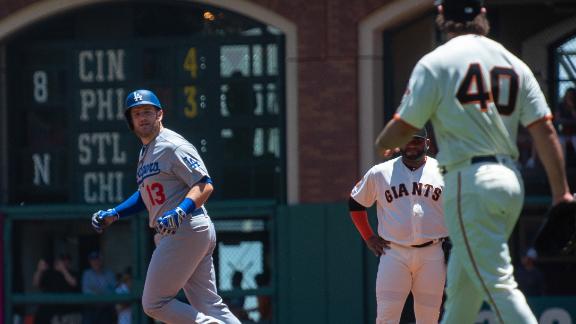 AP
SAN FRANCISCO -- Max Muncy added another layer to the Dodgers-Giants rivalry with a long home run off Madison Bumgarner that landed in McCovey Cove and left the San Francisco ace fuming.

Then, Muncy tossed in a verbal jab for good measure as he rounded the bases.

"I told him: If you don't want me to watch the ball you can go in the ocean and get it,''' Muncy said. "Honestly, I thought it was probably one of my tamer bat-flips that I've ever done. I didn't actually think it was anything outrageous. I took one or two steps out of the box, started jogging, and that was really all it was.''

On a day highlighted by strong pitching from both teams, Muncy's blast into the San Francisco Bay accounted for the only run in the Dodgers' 1-0 win over the Giants on Sunday.

Walker Buehler and two relievers combined on a five-hitter as Los Angeles remained unbeaten in its last 11 series (nine wins, two splits), the longest active streak in the majors.

"It was kind of an old-school baseball game,'' Dodgers manager Dave Roberts said. "You get two No. 1's going head to head. We saw the best of Madison Bumgarner and matched Walker pitch for pitch. Fortunately for us, we scored one more than they did.'' That one run nearly sparked fireworks between the NL West rivals after Bumgarner became upset watching Muncy stroll out of the box following his home run.

"He said, You don't watch the ball, you run,''' Muncy said. "That's what he told me. Truth of it is, it was just a guy out there competing. He was upset he made a bad pitch. That's really all it was to it.''

Bumgarner (3-6) left a 92 mph fastball high over the plate to Muncy, who crushed the ball 426 feet into the waters past the walkway beyond the right field wall.

Already frustrated by two pitches that didn't go his way against leadoff hitter Kike Hernandez, Bumgarner was even more angry after Muncy admired his home run while slowly walking toward first base. Bumgarner walked toward Muncy and the two players appeared to yell at one another as Muncy rounded the bag.

"He just struck a pose and walked further than I liked,'' Bumgarner said.

Plate umpire Will Little rushed out and walked Bumgarner back toward the mound as Muncy continued around the bases. Muncy then shouted toward Bumgarner again as he crossed the plate.

"They want to let everybody be themselves. Let me be myself,'' Bumgarner said. "I just as soon fight than walk or whatever. Just do your thing, I'll do mine.''

Muncy grounded out and walked without further incident in two other at-bats against Bumgarner. Nine of Muncy's 13 home runs have come on the road.

Buehler (7-1) allowed five hits, struck out nine and walked one over seven innings. The right-hander allowed one runner past second base and struck out the side in the fourth. Buehler also beat the Giants on April 30 and is 3-0 in five starts against San Francisco.

Pedro Baez worked around a walk in the eighth, and Kenley Jansen struck out two in a perfect ninth for his 19th save in 21 chances to complete the Dodgers' major league-high ninth shutout this season.

This was the Giants first 1-0 loss at home since June 12, 2015. The losing pitcher in that game? Bumgarner.

NO SUPPORT San Francisco was 0 for 7 with runners in scoring position, dropping to 2 for 27 in five games. San Francisco got back-to-back singles leading off the sixth but Mike Yastrzemski was run down from behind by catcher Austin Barnes trying to scramble back to third on Pablo Sandoval's grounder to third. Buehler then retired Stephen Vogt and Kevin Pillar on flyouts.

Dodgers: LF Joc Pederson was rested because of a sore lower back, an injury he sustained sliding home Saturday.

Giants: 1B Brandon Belt was scratched from the lineup because of a stomach illness. ... Buster Posey (right hamstring strain) ran on a treadmill before the game and will run the bases during Monday's off day. If all goes well, the team expects to activate the Posey off the inactive list Wednesday.

Dodgers: LHP Hyun-Jin Ryu (9-1, 1.35 ERA) pitches against the Los Angeles Angels on Monday. Ryu has the lowest ERA among qualifying pitchers in the majors to go with a 0.77 WHIP.

Giants: RHP Tyler Beede (0-2, 8.15) takes another shot at his first major league win when he faces the visiting San Diego Padres on Tuesday.