Mariners lose to A's amid reports Encarnación headed to NY 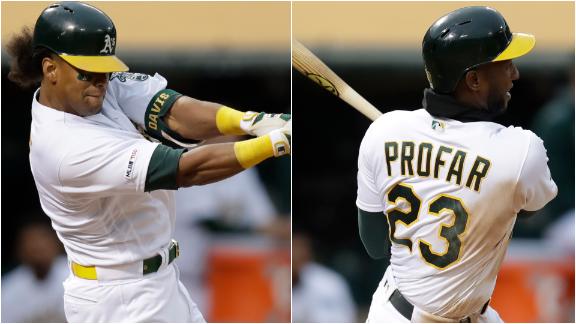 OAKLAND, Calif. -- Seattle manager Scott Servais was just about ready to head out to the field Saturday when he received news he had been anticipating for a while. AL home run leader Edwin Encarnacion was traded to the Yankees, putting the last-place Mariners in full rebuild mode.

"I knew there was something in the works here the last 24 hours, but you never know," Servais said after an 11-2 loss to the Oakland Athletics. "There's a lot of things in the works that never happen. Just right before game I was made aware Edwin was not going to be on the game card or scorecard tonight and we were going to move him."

Seattle also sent cash to the Yankees and received 19-year-old minor league pitcher Juan Then in return. Then was in the Mariners' minor league system in 2017.

It's the second trade the Mariners have made in the last two weeks, a clear signal the franchise is looking toward the future after beginning the season 13-2. Seattle traded Jay Bruce to Philadelphia on June 2 and may be in line to make additional moves before next month's deadline.

Servais praised Encarnacion for his production and work ethic. Seattle's players, however, declined to comment on the trade.

"Edwin did great things here for us," Servais said. "I really think a lot of him, how he went about his business here, knowing that this could probably happen. It's hard to go out and produce the way he did. He did everything we could ask him. He's leading the league in home runs, he's been awesome in our clubhouse. Certainly wish him the best."

Servais had plenty of time to contemplate the state of his ballclub after being ejected by home plate umpire Carlos Torres in the fourth inning. Kyle Seager was called out on strikes and was arguing with Torres when Servais intervened and was tossed.

It was a frustrating day all around for Seattle. The Mariners struck out 12 times and matched their season high with four errors.

"Just a sloppy, sloppy game," Servais said. "We hadn't seen that in a while. We'd been playing pretty good ball this road trip. Very competitive in almost all the games, but not so much tonight."

"It started with Frankie," manager Bob Melvin said. "It's becoming typical. He didn't have his best command early on, but as the game went along he found it."

Montas (9-2) was crisp in winning his fifth straight. He allowed two runs, six hits and walked one. He struck out cleanup hitter Daniel Vogelbach and Kyle Seager twice and struck out the side in the fourth. Montas had nine or more strikeouts for the fourth time in 14 starts.

"I'm just trying to throw strikes, and they're swinging," Montas said. "I worked pretty hard during the offseason and I'm starting to get better. My splitter has been especially good. If they look for the fastball, I can throw my off-speed stuff."

The A's scored three runs in the first against opener Gerson Bautista (0-1), then got to Wade LeBlanc for one in the second and five in the fourth.

WARMING UP WITH THE WEATHER

Seattle shortstop J.P. Crawford made a diving stop on a sharp grounder up the middle by Semien in the fifth inning, then flipped the ball from his glove to second baseman Dylan Moore, who threw to first for the out.

Mariners: Ryon Healy is awaiting results after undergoing additional tests on his sore lower back. He has been out since May 21. ... Hunter Strickland (right lat strain) underwent another MRI test after suffering a setback. Strickland is expected to resume throwing by the middle of next week.

Athletics: Stephen Piscotty returned to the team after undergoing minor surgery to have a melanoma removed from his right ear lobe.