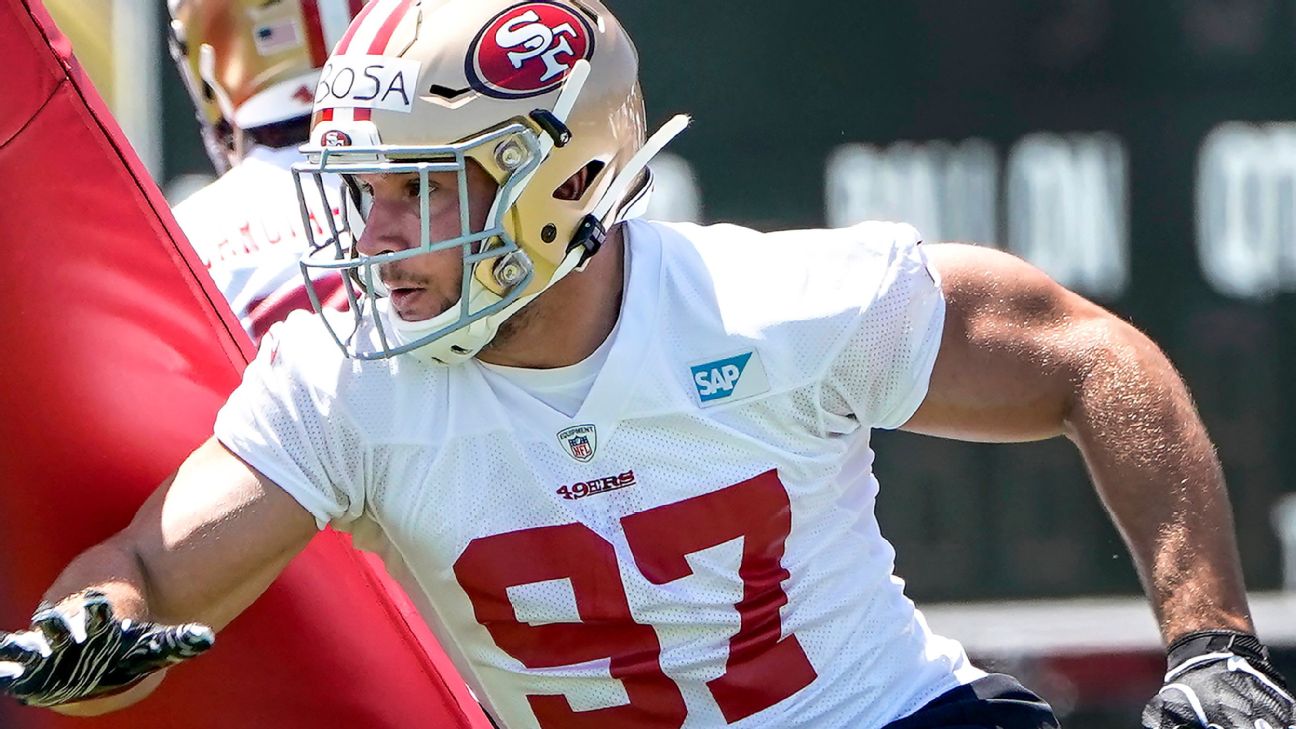 Lynch told KNBR Radio in San Francisco that Bosa, the No. 2 overall pick in the 2019 draft, does not have a "full-blown" high-ankle sprain, but there are "components" of that injury.

"It's a significant ankle sprain, and there's that dreaded high-ankle sprain -- he doesn't have a full-blown one -- but it has some components of that," Lynch told KNBR. "As for timing, I think what we're comfortable saying -- and a lot is going to happen here with kind of the follow-up today, they've got the scans -- it's safe to say we won't see him in the preseason and then we're going to be very prudent."

Coach Kyle Shanahan and Lynch both said that the hope is for Bosa to be ready for the start of the regular season against the Tampa Bay Buccaneerson Sept. 8. The Niners, however, said they won't push Bosa if he's not ready.

"We want him right," Lynch said. "We're gonna do what's in the best interest and trust the medical staff on that. And trust Nick. We'll see where that goes."

Running back Jerick McKinnon (knee), cornerback Jason Verrett (ankle), center Weston Richburg (knee) and nickel cornerback K'Waun Williams (knee) are other injured Niners players who are likely to miss the preseason and will be aiming to return for the regular-season opener, Shanahan said.

McKinnon, who was activated from the physically unable to perform list Tuesday, is having a platelet rich plasma injection in his surgically repaired right knee and is going to miss the next two weeks. Shanahan said McKinnon began to feel "a lot of soreness" after taking part in individual drills the past two days.

"We have got to be smart with that," Shanahan said. "... He'll have 18 days before Week 1 after that. If he's ready, that would be great. If not, we'll be patient with him, let him come back and expect one of our other guys to step up."

Verrett, who signed as a free agent in the offseason, suffered an injury similar to Bosa's on Wednesday and will miss the rest of the preseason. Williams, who has been the team's primary slot corner the past two seasons, is "iffy" for Week 1 after having a recent knee scope, Shanahan said. Richburg remains on the PUP list and has always targeted the regular-season opener for his return.

Shanahan was not pleased with what he and Lynch called a "sloppy" practice Wednesday in which too many players were going to the ground.

Lynch said "a big human being" fell on Bosa's leg on a running play off the right side. Bosa stayed down on the field after the play as members of the team's medical staff rushed to his side and examined the lower part of his right leg and ankle.

After a few minutes, Bosa was able to stand and walk off the field with two trainers. He slowly headed into Levi's Stadium without assistance for further examination.

"He wants to come back tomorrow, but he had an over-300-pound man land on his leg and it was very fortunate that we didn't lose him for the year," Shanahan said.

Bosa has had a long injury history. He missed most of last season at Ohio State because of a core muscle injury suffered in the team's third game. After being drafted in April, Bosa missed most of the 49ers' offseason program with a hamstring issue. He also suffered a torn ACL as a senior in high school.

"We don't feel he is injury prone," Lynch said. "Yesterday, he had a big human being fall on his legs while he was engaged with someone else. So, some of those things, that's football, you can't prevent that. We're thrilled with what we have in Nick Bosa. We're gonna get him right and he'll be a great player for a long time in this league."

In his first NFL training camp, Bosa had made it through nine practices without issue and has made a strong first impression on teammates and coaches. He has worked with the starting defense and the second unit and was with the starters Wednesday before he was injured.

"The great thing I can tell you about Nick Bosa is he's been dominating practice out here on a daily basis," Lynch said. "He's a game-changing type player -- everything we hoped and expected -- and we have to get him right for this season."

Lynch said he hopes defensive end Dee Ford, who has been out with knee tendinitis, can return to practice prior to the third preseason game against the Kansas City Chiefs on Aug. 24.

"Dee is fine," Lynch said. "He's kind of done his week down, and now it's back to ramping him back up. He should be ready, I believe, [for] Kansas City [in] Week 3 of preseason. Whether we'll put him out there or not, I'm not sure, but he'll be back practicing then." 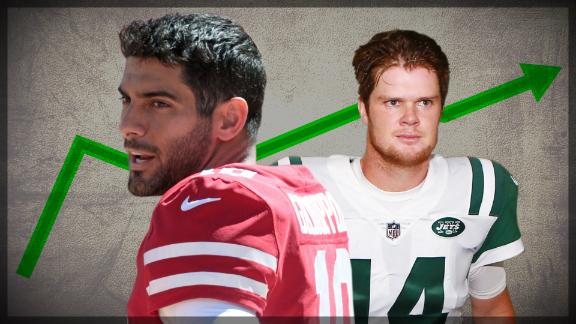 Why the Jets and 49ers are safe bets to improve this year
Bill Barnwell and Dan Graziano dive into the numbers to explain why the Jets and the 49ers are likely to take a step forward this season.
Report a correction or typo
Related topics:
sportsespnjerick mckinnonsan francisco 49ersnflnick bosa
Copyright © 2020 ESPN Internet Ventures. All rights reserved.
More Videos
From CNN Newsource affiliates
TOP STORIES
14 Americans evacuated from Diamond Princess cruise test positive for coronavirus