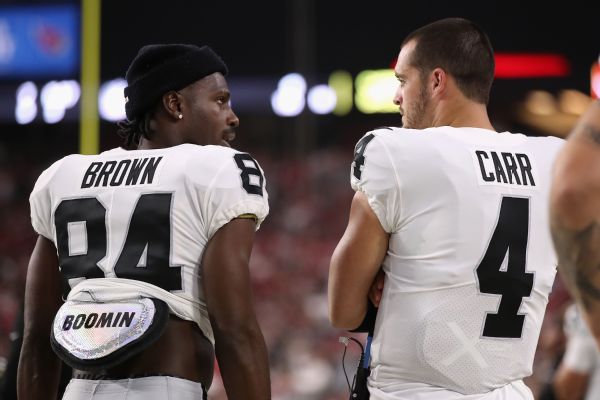 ALAMEDA, Calif. -- Derek Carr, team captain, starting quarterback and face of the franchise, declined to talk to the media Saturday. His slumped shoulders and hound-dog countenance as he sat at his stall and scrolled through his phone said enough.

The Antonio Brown saga had come to a merciful end for the Oakland Raiders, and it made for a strange locker room two days before the season opener on ESPN's Monday Night Football against the Denver Broncos.

News of Brown agreeing to a deal with New England had not yet broken by the time the Raiders' locker room closed.

In one corner, two players wondered aloud why Brown could not simply play football and get his $30 million. In another, outside linebacker Tahir Whitehead, another team captain, spoke of putting the team first.

"He didn't want to be here and we tried to support him, but at the end of the day, the rest of the guys in here were thinking team first and if, obviously, you didn't possess that type of mentality, then it's not going to work out."

Across the way, the Raiders' three first-round draft picks were unaffected in their triangle of lockers, defensive end Clelin Ferrell, running back Josh Jacobs and safety Johnathan Abram facing one another. Especially Jacobs, whose role might get a tad larger against the Broncos.

"My role was going to be what it was, and my game was going to speak for itself regardless of any circumstance," he insisted. "And that's just how I view it. I respect [Brown's] decision. I was actually with him yesterday, so, I mean, it is what it is.

"I was with him yesterday, so I knew everything; I was right there with him when he made the phone call. It is what it is. I understand his point of view. At the same time I understand [the Raiders'] point of view. But at the end of the day, it's not my business, so I just stay in my lane, focus and control what I can control."

Which is carrying the ball. He had only 251 total carries at Alabama, and his single-game high for attempts was 20 -- for 97 yards against Abram's Mississippi State Bulldogs last season.

"I just focus on learning the plays and getting better and getting some cohesiveness with the offensive line, things like that," Jacobs said. "So, [Brown's saga] wasn't nothing to me."

Still, it was an offense that Raiders coach Jon Gruden built for Brown, who, five hours after his release was announced by Oakland, agreed with the Patriots on a one-year deal worth up to $15 million that includes a $9 million signing bonus, his agent, Drew Rosenhaus, told ESPN's Adam Schefter.

Raiders tight end Darren Waller said no one was in a "sad state" in the building.

"We don't take anything personally," Waller said. "I don't have anything against him. I loved him when he was here. He was right next to me at my locker. Positive dude. But if he's not here anymore, we don't hate him -- we just have to move on and handle business. It's as simple as that."

Added onetime Brown nemesis Vontaze Burfict, who is a first-year Raider, a team captain and the middle linebacker: "AB's not tackling for us; we're playing defense, so our job is to go out there and stop them from scoring, and that's all we've got on our plate.

"AB was our teammate -- hate to see him gone, praying for him. Hopefully he gets everything cleaned up. He's a great football player, but like I said, we're worried about Monday."

Gruden's offense will now rely on a downtrodden Carr, a rookie in Jacobs, an untested tight end in Waller and a new No. 1 receiver in Tyrell Williams. Go ahead, call it the toughest shot Oakland has taken from New England since the Tuck Rule.

A day earlier, the Raiders figured the Brown mess was squashed, with the receiver issuing a tearful apology with the captains -- Carr, Whitehead, Burfict, free safety Lamarcus Joyner and center Rodney Hudson -- at his side.

"Whether he was here or not, we all had a job to do. I know everybody's excited. More guys are going to get opportunities, so we're going to go out there and still do our job well and get the win. That's the main goal. We have all the confidence in the world with everybody we have, so we're ready to go."

"I enjoy the guys that are here and I'm doing it with, and I'm just excited for Monday night to go play," he said. "Obviously, Antonio's a great player and someone that we wish we could have, because he is one of the best receivers in the NFL, and so we're going to miss him. But like I said, it's next man up." 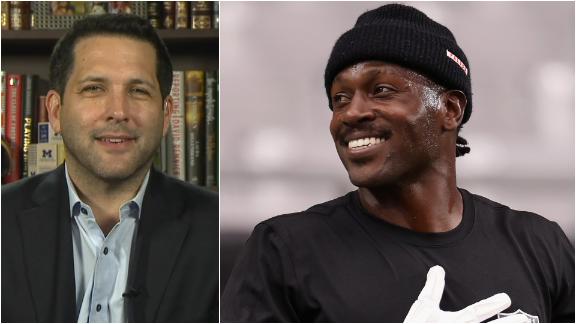 Schefter chronicles Brown's wild day
Adam Schefter reviews Antonio Brown's day that started with getting released by the Raiders and ended with a one-year deal with the Patriots. 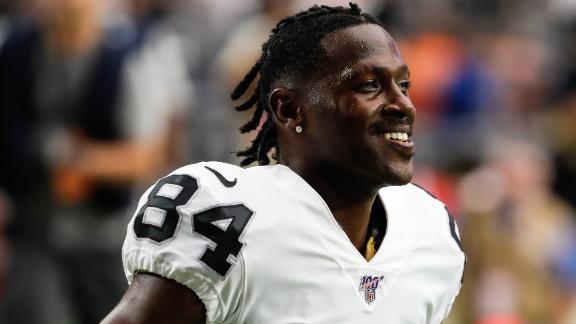 Acho on AB to the Patriots: He must be a genius of sorts
Jim Mora and Emmanuel Acho aren't surprised by the Patriots agreeing to a 1-year deal with Antonio Brown, knowing he won't get away with some of his previous antics.
Report a correction or typo
Related topics:
sportsespnnfloakland raidersantonio brownderek carr
Copyright © 2021 ESPN Internet Ventures. All rights reserved.
More Videos
From CNN Newsource affiliates
TOP STORIES