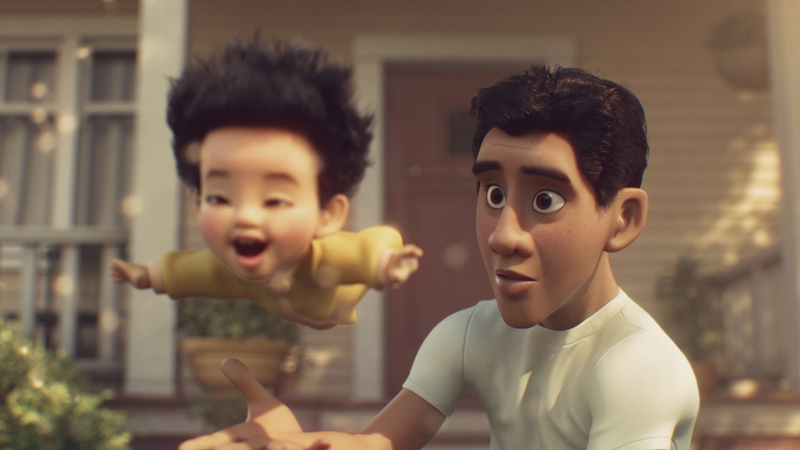 Pixar has made a bit of history by featuring Filipino CGI animated characters for the first time in a new film.

"Float" is a film about acceptance. In it, a father discovered his adorable son is unlike other kids. The film followed their trials and tribulations.

Pixar writer/producer Bobby Rubio talked to us about his project.

RELATED: Disney+: What to know about price, release date, shows and more!

"It's based on my own personal story of my son," he explained. "In the story, the father is dealing with a son that floats, which makes him different from other children."

"Float" was seen as a chance to celebrate children with unique gifts.

Rubio said he took a feature-based approach to make the characters Filipino American. The father has darker skin and a flatter nose.

"I know we don't all look alike, but at the same time, I wanted traits that I had so that it at least felt authentic," he said.

The characters are animated versions of himself and his son. Rubio has long looked for ways to introduce his culture to a broader audience, and Pixar offered that opportunity.

RELATED: What movies, shows can you watch on Disney+? Highlights of what's coming to Disney Plus streaming service

"As a Filipino-American and it being Filipino History Month, I am super proud that this is coming out, and we are making history," he said.

We can't tell you how the seven-minute short ends, but it is a heart-warming story.

When "Float" was introduced at a special screening, the first-time director was able to gauge the crowd's response.

"To see the people react to certain times that you wanted them to react was amazing, and I totally loved it," Rubio recalled.

"Float" is one of four Pixar SparkShorts, which will be featured on the new Disney+ streaming service when it is launched on Nov. 12.