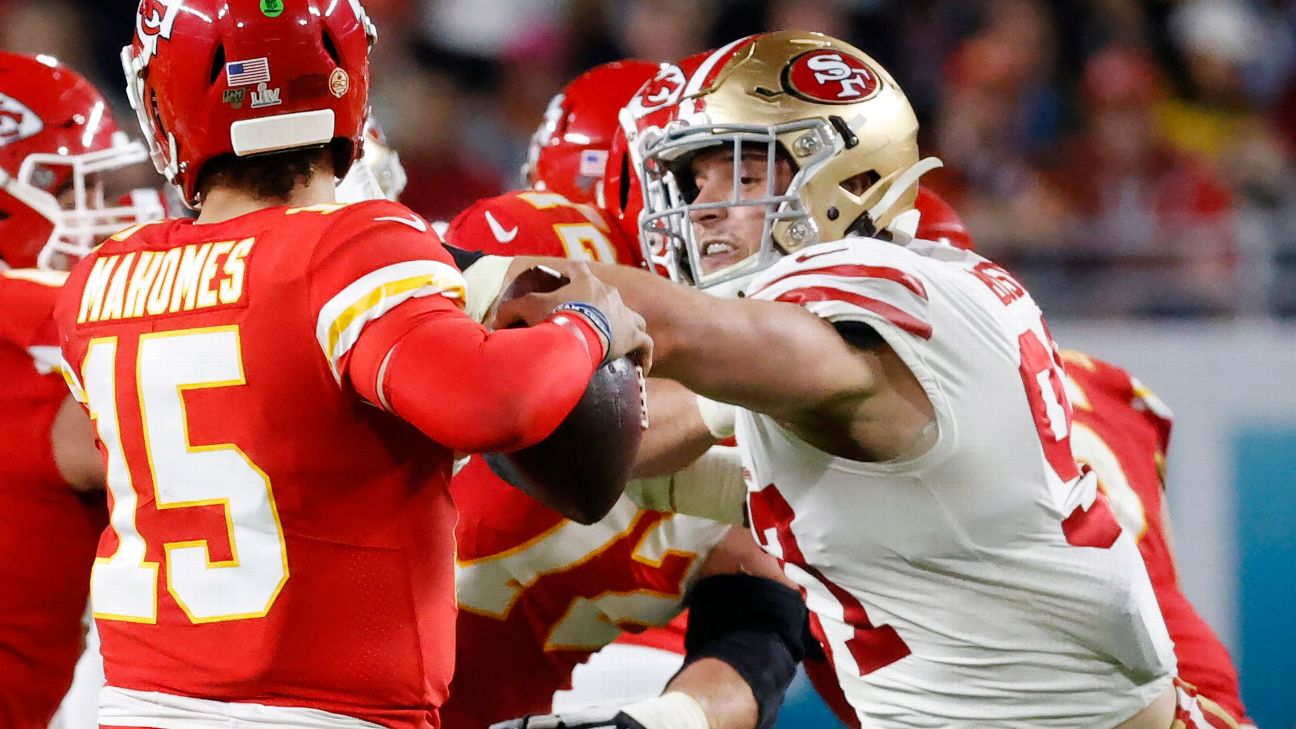 SANTA CLARA, Calif. -- In the days after their loss in Super Bowl LIV, the San Francisco 49ers haven't shied away from reliving the disappointment.

The Niners have already watched the 31-20 loss to the Kansas City Chiefs again, some even for repeat viewings.

"I've watched the Super Bowl at least five, six times," receiver Emmanuel Sanders said Wednesday. "... It's like watching the Titanic and you hope the ship just don't sink and, for some reason, the ship just keeps sinking over and over. And you go back and watch the game and you just hope that all the plays that we left out there and the possible opportunities that we could have [had] come out victorious. But we didn't.

"That's the reality. So now we've got to move on and look forward to next year and this offseason of grinding and trying to get back and trying to win it again."

The 49ers cleaned out their lockers, with players stopping periodically to speak to the media and reflect on being NFC champions after finishing 4-12 the previous year.

Questions about the future were the order of the day, but most of the Niners couldn't help but offer further thoughts on the pain of coughing up a 10-point lead in the final eight minutes of the Super Bowl.

Most of the Niners who spoke Wednesday offered promises of turning the disappointment into motivation. Defensive tackle DeForest Buckner said he watched the game and took notes on what he needs to do to make the "plays that I feel like I could have made that I missed."

At the top of that list was the third-and-15 pass by Chiefs quarterback Patrick Mahomes to receiver Tyreek Hill for a gain of 44 yards, which set up Kansas City's 21-point scoring spree with about seven minutes to go.

On the play, Buckner narrowly missed dropping Mahomes for a sack that likely would have forced Kansas City to punt and could have helped put the game away.

"That was probably the biggest play of the game," Buckner said. "We had the momentum. We were up 20-10, we needed to just get off the field. Coming around the corner, hitting him literally as he throws it, and looking up and seeing it complete was probably one of the most gut-wrenching feelings I had in my career.

Buckner said he has a photo on his phone of him nearly bringing Mahomes down and he plans to use that picture as fuel to get better this offseason. Other teammates offered similar examples of near misses that they intend to use to propel them through the offseason.

"As an offense, as a team, we've been in that situation multiple times and answered the bell," quarterback Jimmy Garoppolo said Wednesday about trying to put the game away in the fourth quarter. "It's tough that one time you didn't. But that's what people remember, that's the world we live in and you just have to own up to it and be a man about it.

There was a similar message in Wednesday's team meeting, where coach Kyle Shanahan, general manager John Lynch and a handful of players and coaches addressed the team. They told the players to be proud of this season and to file away the feeling they had walking off the field at Hard Rock Stadium.

In a viral video making the rounds on social media Wednesday, tight end George Kittle can be seen vowing to return to the Super Bowl with "a m-----f---ing vengeance" in the game's closing moments.

"If it doesn't automatically turn into fuel for you, then I think you're in the wrong sport," Kittle said.

Of course, before the 49ers can turn the page to returning to the game's biggest stage, they will have to go through an offseason sure to bring plenty of change.

Sanders, defensive lineman Arik Armstead and free safety Jimmie Ward are all set to become unrestricted free agents in the next six weeks. None had much certainty about what's to come, though they all expressed interest in returning. Armstead even said he'd be willing to accept a franchise tag if the Niners used it on him.

Kittle and Buckner are also due for big-money contract extensions, though neither was much in the mood to discuss the possibility Wednesday.

While an extension for Kittle is likely, one thing he won't have to worry about is any offseason medical procedures. Knee and ankle issues cost Kittle two games this season, though he played out the rest of the season and playoffs with no apparent problems.

"I missed two games but nothing that requires any surgery," Kittle said. "Just rehab, get the body back to 100%. That's it."

Wide receiver Trent Taylor and running back Jerick McKinnon, both of whom were expected to play key roles but did not appear in any games because of injuries, also shed light on their futures.

Taylor revealed that he had five surgeries to fix the Jones fracture in his foot. Though he still isn't out of a walking boot, he hopes to be soon so he can finally begin his rehab. He has no timetable yet on a return.

McKinnon suffered multiple setbacks in his attempted return from a torn ACL and has not appeared in a game for the Niners since signing a four-year, $30 million deal on March 14, 2018.

Although McKinnon said he's getting better and progressing in his recovery, he knows he's unlikely to return at his current cap number of $8.55 million for next season. He said he's open to figuring out a way to return.

Defensive tackle Earl Mitchell, who re-signed with the Niners late in the season after injuries struck the team, is one player who will not be back. Mitchell came out of retirement to play in the playoffs and joked that he'd be waiting again for his phone to ring next postseason.

Jokes aside, Mitchell, who played 10 NFL seasons, said it's time to call it a career -- this time on his own terms.

"Most likely, I'm done," Mitchell told ESPN. "I'm done. I'm grateful I got that opportunity to come back, but I think that was a good way to finish my career.

"I feel like I got some good closure this time. Last year was pretty rough how things ended. But to come back and to play in the Super Bowl was just surreal." 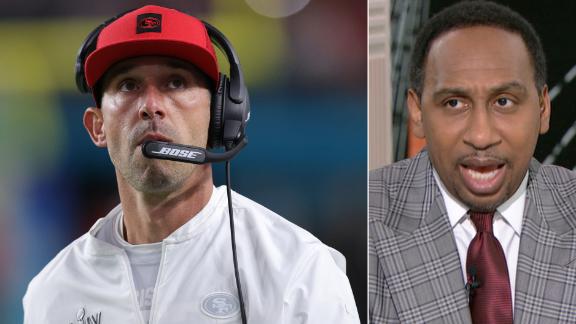 Stephen A.: The 49ers blew this game!
Stephen A. Smith can't understand what Kyle Shanahan was doing coaching the 49ers in their loss to the Chiefs in the Super Bowl.
Report a correction or typo
Related topics:
sportsespnnewssan francisco 49ersnfl
Copyright © 2020 ESPN Internet Ventures. All rights reserved.
More Videos
From CNN Newsource affiliates
TOP STORIES
SF businesses, churches stressed after roll back to purple tier