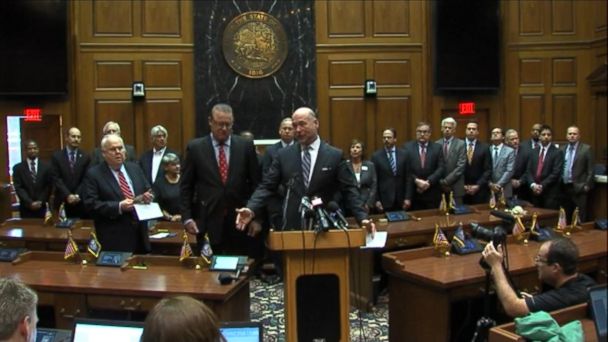 Indiana's top two legislators, both Republicans, announced Thursday morning a "fix" to their state's controversial religious-freedom law -- a change that would preclude Indiana businesses from denying services to gays or lesbians.

"What was intended as a message of inclusion was interpreted as a message of exclusion, especially for the LGBT community," Indiana House Speaker Brian Bosma told reporters at a 9 a.m. news conference. "Nothing could have been further from the truth, but it was clear the perception had to be addressed."

The proposed update, as released by Indiana GOP lawmakers online, states that the controversial religious-freedom law does not allow any business to deny service to any customer -- including on the grounds of sexual orientation or gender identity.

The new language will still have to be approved by Indiana's legislature and signed by the state's Republican governor, Mike Pence, before it goes into effect. Pence this week announced he would support changing the law.

Bosma and Senate President Pro Tem David Long appeared with business leaders from Indiana, claiming a broad agreement on how to change the law. The two extended an apology to citizens -- not for the law they passed, but for how it was interpreted.

"I had a chance to sit down with Greg Louganis for about an hour, just visiting," Bosma said of the Olympic diver who is openly gay. "He shared with me the personal hurt that he felt when he heard the incorrect message that Indiana supported discrimination."

Bosma said he "extended an apology to him, not for actions taken, but for messages received. ... I personally extend that apology to anyone who received that same message."

The NCAA, which is based in Indiana and will hold the men's basketball Final Four in Indianapolis on Saturday, was an early critic of the law. On Thursday morning, it voiced support for the "fix."

"We are very pleased the Indiana legislature is taking action to amend Senate Bill 101 so that it is clear individuals cannot be discriminated against," NCAA President Mark Emmert said in a written statement. "NCAA core values call for an environment that is inclusive and non-discriminatory for our student-athletes, membership, fans, staff and their families. We look forward to the amended bill being passed quickly and signed into law expeditiously by the governor."

Signed by Pence last week, the state's "Religious Freedom Restoration Act" states that a higher threshold must be met before a law is upheld where it infringes on the free exercise of religion by people or businesses -- between those private entities or where the government is involved.

Both critical gay-rights activists and supportive social conservatives have said the law would mean Christian wedding vendors would not be required to serve gay couples getting married. A wave of national backlash ensued, including wide condemnation from large businesses and organizations based in or hosting events in Indiana.

The Yelp! listing for an Indiana pizza restaurant became an Internet sensation on Wednesday, after the restaurant said it would not serve pizza at a gay wedding if asked.

Although Pence initially insisted the law would not change, Bosma and Long announced on Monday that they would change the law to preclude denial of services for gays and lesbians by Indiana businesses.

The move falls short of what national gay-rights activists have demanded, namely that Indiana add "sexual orientation" and "gender identity" to statewide civil-rights law as classes of people protected from discrimination. Asked why the legislature was not taking that step, Long pointed out that such protections do not exist at the federal level.

Bosma added, "To expect lawmakers to have a major policy change on a dime and on the fly is not realistic."

A handful of Indiana's counties have laws providing such protections at the local level.

After the Republicans' announcement, state House Minority Leader Scott Pelath said the fix does not go far enough and called for a full repeal of the law, which Indiana Democrats have supported as the controversy unfolded over the last week.

"I want to hear one of the proponents fess up, because the healing cannot begin until that happens. The solution is simple. Repeal this law," Pelath said, the Associated Press reported.

Long, Bosma and Pence have all insisted that the law was never intended to allow businesses to deny services to gays or lesbians on religious grounds, despite activist supporters on the right saying they were basing their support on the notion that the law would indeed let businesses make that claim in court. At Thursday's press conference, Bosma said the update was not legally necessary but was being made to correct misperceptions.