KGO
By Kayla Galloway
SAN FRANCISCO (KGO) -- As many American cities erupt in protest over the police killing of George Floyd, San Francisco's Police Chief Bill Scott recalled his time Sunday morning as a Los Angeles police officer in April of 1992 during the Rodney King riots.

The riots began April 29, 1992, lasting for days, after the acquittal of several Los Angeles police officers who were charged in the beating of King, which was filmed by a bystander and was later sent to the local news.

More than 60 people were killed and thousands were injured in the riots.

In light the current protests and the new citywide curfew, Scott pleaded with San Franciscans Sunday to stay indoors.

The city curfew begins at 8 p.m. Sunday and continues through 5 a.m.

Almost three decades after the King riots, Americans now witness Floyd's death at the hands of a police officer, who is facing murder and manslaughter charges.

The altercation between Floyd and the police officer was filmed.

Video shows the officer kneeling on Floyd until he became motionless.

"Too many African American men have been killed at the hands of law enforcement," the police chief said.

He said it's that reality that drives law enforcement to bring change.

"Part of what is driving us professionals in the law enforcement world is to change this narrative," Scott said.

He recognized that those protesting simply want to be heard.

"As an African American man, I think I know probably more than most how it feels. I know both sides of this equation," Scott said.

He reiterated, "City leaders hear you, your chief of police hears you."

Despite the violence and vandalism Saturday, he recognized that no lives were lost in San Francisco.

"As bad as thing were here last night, it could've been a lot worse," he said.

Saturday's protest started peacefully at San Francisco's city hall and then escalated as the night went on.

"We don't want to see (this city) go up in flames," the police chief said.

Ten people were arrested on felony looting charges, Scott said, and others were detained after the protest.

Scott and other city officials are now asking that San Franciscans follow the curfew order and stay home.

The curfew goes into effect in at 8 p.m. Sunday in San Francisco and was put in place after Saturday's protests in response to George Floyd's death. 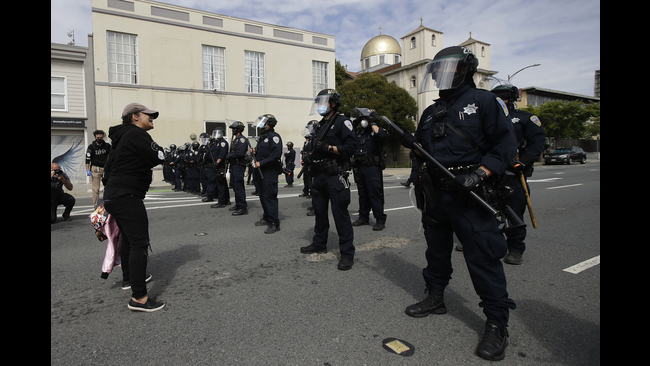 'Soul of a Nation,' begins in Evanston, 1st U.S. city to fund reparations for Black residents

1st look at 'Soul of a Nation,' highlighting Black life in US