KGO
By Kate Larsen
OAKLAND, Calif. (KGO) -- The Fourth of July is still more than a week away, but communities across the Bay Area have already been listening to fireworks for weeks. And humans aren't the only ones losing sleep over the nightly noise. Animals at local zoos are having trouble too.

"We've had some really loud ones," said Colleen Kinzley, the Director of Animal Care, Conservation, and Research at the Oakland Zoo. "I actually live here on the zoo grounds and last night it really caught my attention."

Kinzley says the explosion of fireworks has been scaring their animals and sending them into hiding. "The giraffe and eland, we'll see that startle response, where they'll kind of take off across the exhibit."

"The chimpanzees and the baboons we call a fear bark, and so they're making that fearful vocalization, it's an alarm call really. They feel like something's wrong, they're in danger. Making that vocalization to let the whole troop know that there's danger."

The zoo's birds have been particularly sensitive to the nightly noise. While ABC7's crew was watching a Malayan Wreathed Hornbill, even a faint boom in the distance, forced the bird to fly away.

Kinzley says some of the noise mitigation strategies they use to soothe zoo animals, can also be used at home for cats and dogs that are afraid of fireworks.

"Leaving radios on or televisions on for some of our animals just to have kind of an ambient noise in the background, so that that loudness doesn't come out of complete silence and that's what people can do at home too for their own pets."

Kinzley says there's some silver lining to this unusually long fireworks season. "It'll get worse before it gets better, but the fact that there has been so much leading up to it, we're probably not going to have as much of a reaction as we've had on Fourth of July nights."
Report a correction or typo
Related topics:
pets & animalsoakland zoooaklandzoooakland zooanimals in perilwild animalsfireworks
Copyright © 2021 KGO-TV. All Rights Reserved.
OAKLAND ZOO 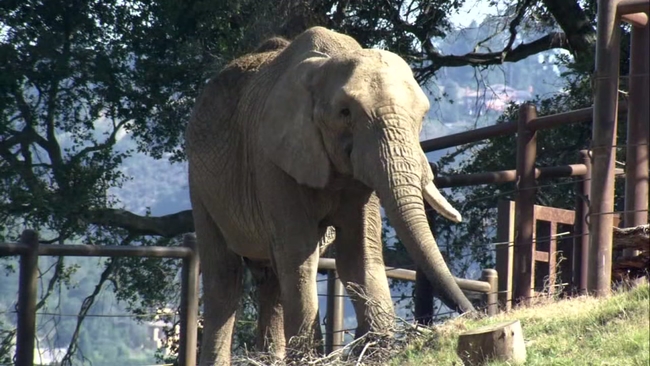