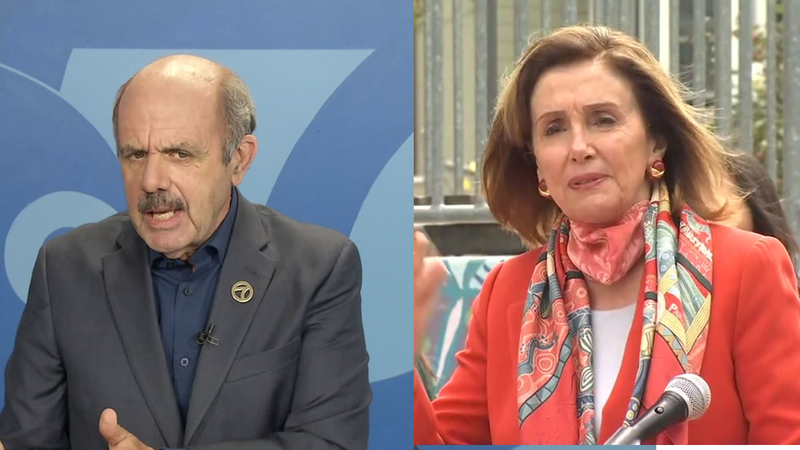 SAN FRANCISCO (KGO) -- Nancy Pelosi took responsibility Wednesday for trusting the word of a San Francisco hair salon that said it was OK to come in for a solo visit even though the city still does not allow indoor beauty services due to the novel coronavirus pandemic.

But the Democratic House Speaker also called Monday's visit a "setup" and said the salon owes her an apology for misrepresenting city health orders.

House Speaker Nancy Pelosi responded to the blow up about her Monday blow out in a San Francisco salon, saying she doesn't owe anyone an apologyand that she was "set up".

Salon owners and small business owners who have been struggling amid the pandemic shared their disappointment and President Donald Trump was quick to criticize her.

ABC7 News Anchor Larry Beil and ABC7 News contributor and San Francisco Chronicle insider Phil Matier discussed the controversy and how it affects the election, which is weeks away.

"'Is it reasonable to assume that as an elected official, you of all people have to know the rules in your own district?' Well, you should know the rules in your own district. Chances are you helped make them one way or the other and Nancy Pelosi is urging for the entire country to wear masks and follow these procedures. Well, that puts her in the frame," Matier said.

Matier says to imagine every politician reaching into a piggy bank and taking out a nickel. He added, Pelosi, getting her hair done "isn't something huge, but it's a nickel that everyone has an opinion on whether you are somebody that wants to get their hair done and they couldn't. Whether you're a small business that wants to cut somebody's hair and can't, or whether you're Donald Trump and you're going to use it to bash Pelosi."

What does Pelosi mean by a "setup"?

"I mean, let's be honest, nobody forced her to do it (go to the hair salon). And yes, somebody found out she was going -- the owner of the salon. There's questions about why the owner of the salon didn't say you can't come in judicially, you know, something like this might have been going on before one way or the other. And so I don't know if it's a setup, but it should definitely -- you walked into something, something got leaked, and now you're having to face it," Matier said.

How does this impact Pelosi's role within the Democratic Party in the final weeks before the November election?

"I don't think it's going to affect the election," Matier said. "It's going to be something that's thrown up there but what it might affect is that the overall questions and confusions about what can open and what can't and the frustrations from both people and businesses about this that sometimes don't make sense."

You can read Matier's column in the San Francisco Chronicle on Sundays and Wednesdays.