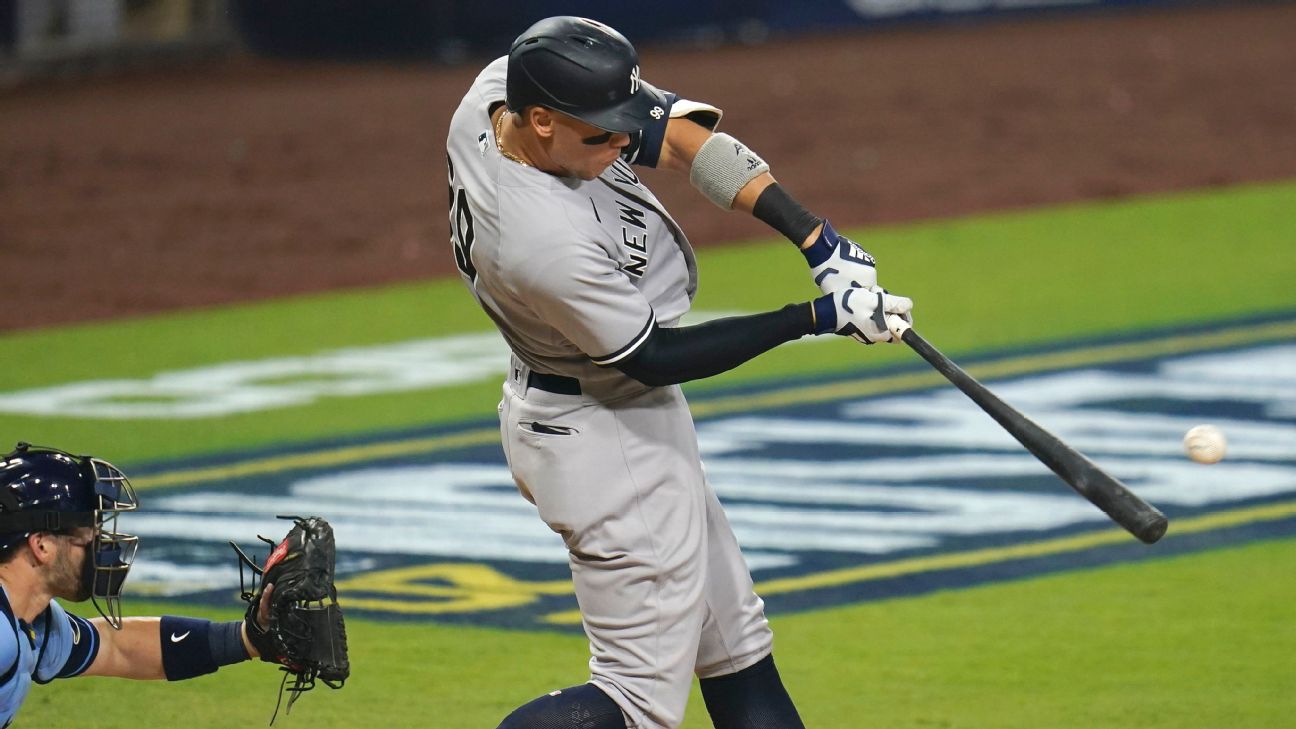 The second round of the 2020 MLB playoffs are underway, with the two American League Division Series beginning play Monday at neutral sites.

The Houston Astros pounced on the Oakland Athletics in a scorching afternoon matchup at Dodger Stadium before theNew York Yankeesgot the jump on the Tampa Bay Raysbehind a four-homer attack that included a game-breaking grand slam byGiancarlo Stanton. Here are the stars, turning points and takeaways from each of Monday's games.

What it means:A Yankee signature moment for Giancarlo Stanton? The designated hitter's ninth-inning grand slam against the mighty Rays bullpen sealed a 9-3 victory to help New York take a 1-0 lead in the best-of-five series in San Diego. The big takeaway is that the Bronx Bombers picked up where they left off in Cleveland, making mincemeat of yet another elite pitching staff. This time around, the victim was 2018 Cy Young winner Blake Snell. Home runs by Clint Frazier, Kyle Higashioka and Aaron Judge off Snell gave the Bombers a 4-3 lead through five innings, which they never relinquished.

The Yankees used the formula they have used all season to score runs: the long ball. New York scored 49.5% of its regular-season runs via home runs, and 21 of the Yankees' 31 runs so far this postseason have come via home runs (68%). The Yankees have now hit 11 homers in their first three postseason games of 2020, the most postseason homers any team has ever hit in a three-game span. If Game 1 is any indication, the Yankees have lived up to their claims that their 2-8 regular-season record against Tampa Bay is a distant memory and that they are truly a "fully operational death star," as general manager Brian Cashman calls them, when they have a fully healthy lineup. The Rays still have one of the deepest pitching staffs in the majors, and will counter with yet another ace, Tyler Glasnow, in Game 2, while the Yankees will go with a surprising choice in 21-year-old rookie Deivi Garcia. -- Marly Rivera

What it means: "What are they gonna say now?" That's what Carlos Correa asked five days ago, after his Astros -- mired by their own cheating scandal, hated everywhere outside of their home city -- beat the Minnesota Twins for the second consecutive time to advance into the second round. Yeah, it was tone-deaf. But baseball needs villains sometimes. Correa is seemingly embracing that role -- and he's thriving in it.

Correa homered twice Monday in the Astros' Game 1 win over an A's team that beat them 70% of the time during the regular season, backing a four-hit game from George Springer and an impressive performance from the team's collection of young pitchers. Both of Correa's home runs went out to straightaway center field, totaling 829 feet, on a warm day when the ball was jumping off the bat.

Astros manager Dusty Baker noted over the weekend that his team was "not playing our best ball" heading into this ALDS. He was still waiting for his accomplished hitters to get going. In Game 1, Correa, Springer, Jose Altuve and Alex Bregman -- the four most reviled baseball players in America -- combined for 11 hits and drove in eight runs. That might spell trouble for the rest of the field. -- Alden Gonzalez 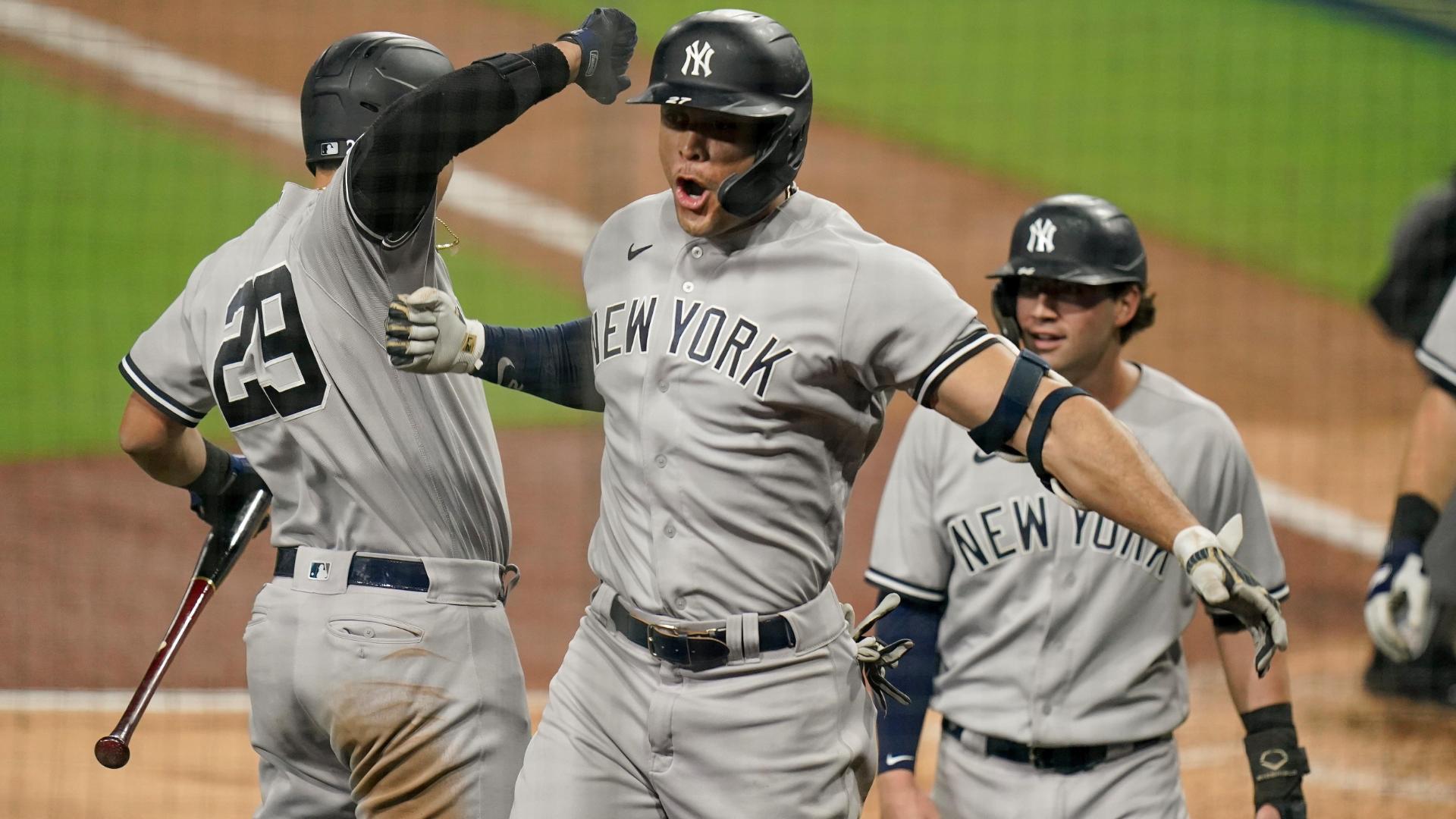 Stanton's grand slam blows game open in ninth
Giancarlo Stanton crushes a grand slam to center field in the ninth inning to give the Yankees a 9-3 lead. 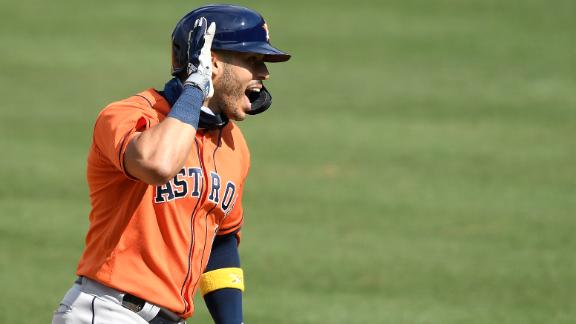