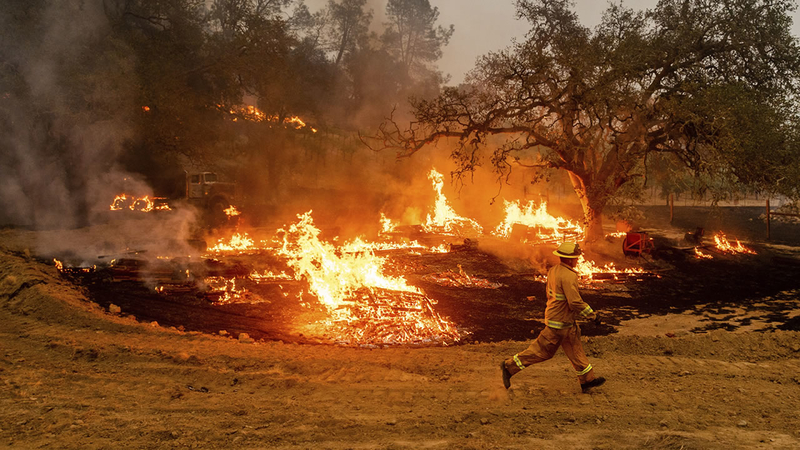 SAN FRANCISCO (KGO) -- Gusty winds and a heat wave will continue to elevate the fire danger in the Bay Area for one more day and people need to be prepared, says ABC7 News meteorologist Mike Nicco.

"The entire Bay Area is under a Heat Advisory from 11 a.m. today until 9 p.m. Friday, plus we've got the fire danger through Friday also," said Nicco.


Very low humidity, very dry fuel and the wind are all contributing factors.

"Millions more people are impacted during this Red Flag Warning than previous ones," said Nicco.

Often times we talk about the Red Flag Warning for areas above 1,000 feet, this time it includes more neighborhoods than normal, explains Nicco.

"The East Bay valleys and the North Bay valleys have been added to the Red Flag Warning, that puts more communities under the gun for critical fire conditions until at least Friday morning."

The North Bay, East Bay Hills, the Diablo Range and Santa Cruz Mountains are also pegged at the highest level for critical fire conditions during the Red Flag Warning, which is in effect until 11 a.m. Friday.

A Wind Advisory was also issued for the North Bay through 11 a.m. Thursday, with gusts up to 50 mph.

"If you melt easily, avoiding looking at today's high temperatures," said Nicco. "It will be even hotter today and into Friday," said Nicco.

Nicco says people need to make sure they have a safety plan ready before doing to bed, including fully charging all your mobile devices in case of a power outage.

A PG&E PSPS has already left thousands without electricity.

"We have dangerous winds, heat and very dry air and dry fuels that will ignite quickly and spread fast," said Nicco. "Get that defensible space around your house shored up, clean of any debris that could turn into fire."

MORE: Find out if you'll be impacted by PSPS here

"I think we could have 90s in San Francisco today," said Nicco. "The winds are going to be a big indicator of when the fire danger is going to be the greatest."

PG&E warned of a possible Public Safety Power Shutoff in most Bay Area counties starting as early as Wednesday afternoon. The North Bay mountains, small pockets in the East Bay near Mt. Diablo, Oakland Hills east of Piedmont, elevated terrains east of Milpitas and pockets of the Santa Cruz Mountains are at highest risk, the utility said Monday.

The power shutoff is expected to impact approximately 53,000 customers in 24 counties in Northern California.

In the Bay Area, about 22,000 customers have lost power in seven counties. The utility hopes to restore services by 10 p.m. Friday, safety permitting. The goal is to prevent fires sparking from power lines that are damaged or knocked down by high winds.

"Hot and dry conditions combined with expected high wind gusts pose an increased risk for damage to the electric system that has the potential to ignite fires in areas with dry vegetation," the agency said in a press release.

PG&E may cut electrical power during days of Red Flag Warnings and/or extreme fire danger, and it could cause WiFi transmitters, streaming TVs and digital assistants like Amazon's Echo to experience an outage. Here are some tips to get ready for a shut off.

Nicco is monitoring two spikes in the wind.

"Thursday at 1 p.m. and then Thursday night into Friday at 4 a.m. we get our last real push of dangerous winds," said Nicco. "It will be a tough night of sleeping because it will be noisy and it will be warm to even hot. Make sure you have an evacuation route ready and your bags packed in case a fire erupts because it will spread rapidly," Nicco added.

On Tuesday night, East Bay Regional Park District officials announced that several parks would be closing begin Wednesday at 5 a.m. through Friday at 11 a.m. due to the increased fire danger.

Here are the parks impacted by that announcement:

For more information about closures and when parks will reopen, click here.