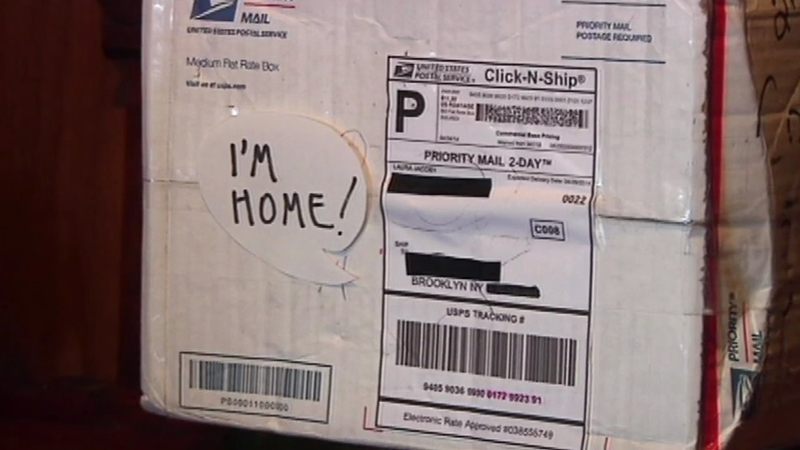 SAN FRANCISCO (KGO) -- It's a quirk in the system but it does happen every so often. A package got stuck for months in an endless cycle known as a mailing loop. It traveled in circles for 40,000 miles across the country and no one could stop it, until 7 On Your Side found a way.

San Francisco resident Laura Jacoby is amazed the little box she mailed months ago still looks like a box. "I really thought it would be quite round by now from rolling back and forth," Jacoby said.

The package just got back after flying back and forth across the country 14 times in three months and Jacoby is sure it set a record. "I calculated and it traveled about 40,000 miles," she said. That's enough to go all the way around the earth, more than once. "One and two-thirds times I think," she said.

The package was a birthday gift Jacoby sent to her god-daughter in Brooklyn. True to its Priority Mail promise, it got there in two days.

However, the package went unclaimed so the post office shipped it back to San Francisco and that's when it entered the postal vortex.

Jacoby was tracking the package online as it bounced from one coast to the other with stops in seven cities and three states. "To Kearny, then back to San Francisco, up to Flushing, back to Brooklyn, back to Kearny," Jacoby said.

The US Postal Service told her unfortunately, the automated system would keep shipping the box back and forth forever, unless a human could trap it. "You must get someone to pounce or possibly there's a guy with a big net and he's waiting to pounce," Jacoby said.

However, the US Postal Service couldn't catch it, so Jacoby wondered if 7 On Your Side could.

"If it's in automation, you know it's like finding a needle in a haystack," US Postal Service spokesperson James Wigdel said.

Wigdel said this rarely happens and why this package got stuck is still a mystery.

"We don't know exactly why it started looping for so long, but once ABC made us aware of it we did our best to trap it," Wigdell said.

This isn't our first case like it. Last year, Roger Thoms of San Francisco ordered a camera lens that looped for a month because a clerk entered the wrong mail code. 7 On Your Side and the US Postal Service finally rescued it.

The US Postal Service put everybody on alert about Jacoby's package and finally somebody in Bethpage New York pounced and got the package back to Jacoby.

By now, she'd forgotten what was inside. "Oh, there was a card, too, I just remembered," Jacoby said.

The wrapped gifts still look perfect and Jacoby still plans to send them off. "I'm gonna get a snail with a backpack and GPS," Jacoby said.

In all seriousness, Jacoby did re-send that package again by Priority Mail. This time, the post office delivered it safely.