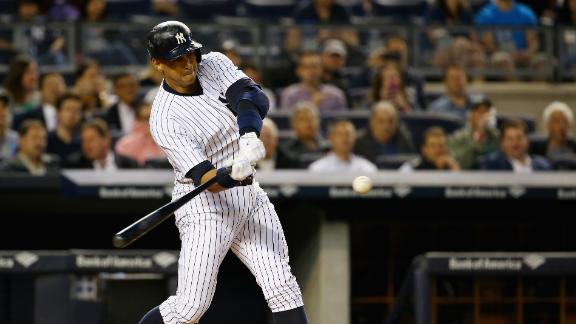 NEW YORK -- For Alex Rodriguez, Willie Mays is in the rearview mirror. Next stop, Babe Ruth.

Rodriguez, the New York Yankees' designated hitter, moved ahead of Mays into sole possession of fourth place on baseball's all-time home runs list with a solo blast -- the 661st of his career -- in the third inning of Thursday's game at Yankee Stadium.

Although he passed Mays on the home runs list, Rodriguez said there's no surpassing the baseball legend.

"Nobody will ever pass Willie Mays. I've talked about him being my father's favorite player," Rodriguez said. "There's only one Willie Mays; not only what he did on the field, but what he meant off the field. He's a legend. He's also a role model for all of us."

No. 661 came on a 1-1 pitch from theBaltimore Orioles'Chris Tillman, a hanging changeup, and Rodriguez belted it into the runway between Monument Park and the visitors bullpen past left-center field.

The shot broke a 2-all tie in the Yankees' 4-3 win over the Orioles, but more significantly, it broke a tie between Rodriguez and Mays, who had been deadlocked at 660 since Rodriguez hit a dramatic pinch-hit home run Friday night at Fenway Park to provide the margin of victory in the Yankees' 3-2 win over theBoston Red Sox.

Thursday's homer was Rodriguez's seventh of the season and prompted a curtain call from the Yankee Stadium crowd.

"It's been a long time," Rodriguez said of the adulation. "I certainly thought the days of curtain calls for me were long gone."

Hesitant to take the curtain call, Rodriguez was pushed out for it by his teammates.

"I was a little embarrassed, and it was a little awkward," Rodriguez said. "I didn't want the game to stop; I did not want to interrupt the game. [Mark Teixeira], like my little brother, was still in the on-deck circle. I looked at [manager] Joe [Girardi] and asked his opinion, and he said, 'Get out there.' I tried to do it as fast as I can."

"All of this is pretty crazy," Rodriguez added. "A year ago today, I never thought that I would ever get a curtain call or be hitting in the middle of the lineup for the New York Yankees, helping our team win."

The turnaround has been swift for Rodriguez. Yankees fan were not sure how to receive him on Opening Day, his first game back after serving a 162-game suspension for performance-enhancing drug violations arising from baseball's Biogenesis investigation.

He has gradually won over the home fans through a combination of his hitting -- his seven home runs and 18 RBIs are second only to Teixeira on the team -- his humble demeanor in the clubhouse and the Yankees' public refusal to pay him a bonus for reaching the 660th home run milestone, the first of five home run milestones for which he reportedly is due $6 million apiece.

Yankees general manager Brian Cashman, confirming what sources have said for quite some time, said Saturday that the Yankees will not trigger the marketing deal because it is their "right, not obligation" to do so.

"That's not where my mind is right now," Rodriguez said, briefly addressing the situation Thursday. "I'm really just trying to enjoy this moment."

He is expected to let the MLB Players Association fight on his behalf to receive the money. The $30 million marketing contract was signed in 2007, when the Yankees re-signed Rodriguez to a 10-year, $275 million contract after he opted out of his 10-year, $252 million deal during that year's World Series.

A-Rod passes Mays in Yankees' win
Alex Rodriguez hits his 661st home run to pass Willie Mays on the all-time list and the Yankees held off the Orioles 4-3.