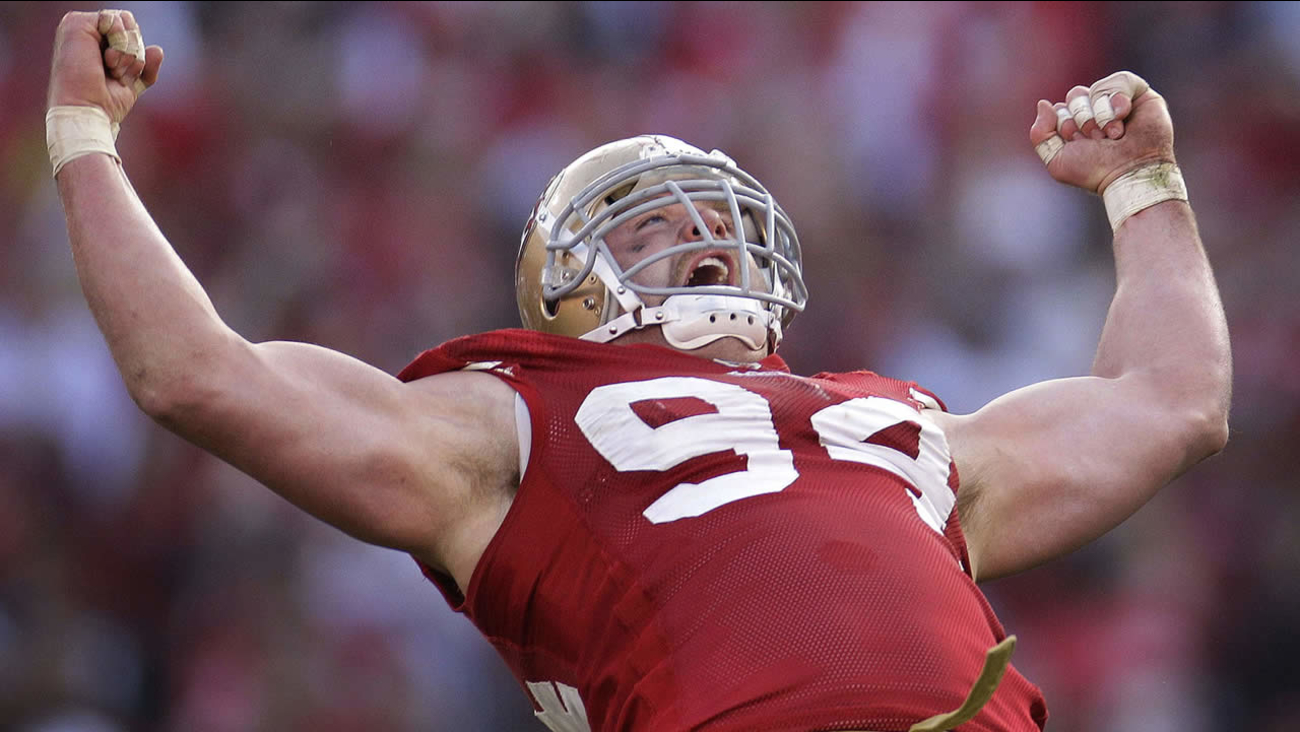 "Tough. Physical. Durable. Hard-working. Dedicated. Selfless. Justin embodies each of those qualities and brought even more with him to work each and every day," 49ers CEO Jed York said. "Whether it was chasing down a wide receiver and forcing a fumble to seal a win, or driving a tackle back into the quarterback's chest, he gave everything he had every play. Justin has earned the respect of the entire NFL community and he will always be remembered as one of the 49ers all-time greats."

"Justin is the consummate professional whose impact on this organization can never be measured by statistics alone," 49ers general manager Trent Baalke said. "His durability, competitiveness, work ethic, strength and rare stamina helped set him apart over his 14-year career. Cowboy will go down as one of the best to ever wear a 49ers uniform and his candidness, work ethic and pure passion for the game will be missed. We wish the very best for him and his family."

"As a football coach, you will always be searching for the next Justin Smith, knowing full well you will never find a player quite like him," 49ers head coach Jim Tomsula said. "Everybody knows about his toughness, durability, and instincts, but his greatest attribute does not get the attention it deserves. Justin never concerned himself with personal accomplishments, his unselfish nature made that impossible. People like to say 'they broke the mold with him,' but there was never a mold. Justin Smith is a hand-crafted football player."

After being selected as the fourth overall pick by the Cincinnati Bengals in the 2001 NFL Draft, Smith went on to play 14 seasons in the National Football League. When he became an unrestricted free agent in 2008, San Francisco swooped in and landed one of the top free agents on the market. A year later, Smith enjoyed the first Pro Bowl season of his career, which sparked a five-year stint of representing the 49ers on the all-star roster.

Smith has garnered great respect from the men he has shared the sidelines with, having twice won the Bill Walsh Award, which is voted on by the coaches and awarded to the team's Most Valuable Player. Along with RB Frank Gore and LB Patrick Willis, the three are the only two-time winners of the award in team history. Smith is also a two-time recipient of the Len Eshmont award, which honors the team MVP as selected by the players. A four-time recipient of the Hazeltine Iron Man Award, given to the most courageous and dedicated defensive player as selected by the defensive coaching staff, he was also presented the Perry/Yonamine Unity Award and Ed Block Courage Award during his time with the 49ers.

GM Trent Baalke: “Cowboy will go down as one of the best to ever wear a #49ers uniform.” #FarewellCowboy http://t.co/swQwwnOTNM

During his career, Smith started 217 of 221 games played, including a streak of 185 consecutive starts from his rookie season through December of 2012. He finished his career with 1,370 tackles, 87.0 sacks, 16 forced fumbles, 10 fumble recoveries, three interceptions and 30 passes defensed. Smith posted at least 5.0 sacks in 12 of his 14 seasons played and is one of 13 players, since sacks became an official statistic in 1982, to register 5.0-or-more sacks in 12-or-more seasons. With 6.5 sacks during the 2013 regular season, Smith became just the 20th player in NFL history to register at least 5.0 sacks in 11 separate seasons. He also posted at least 6.0 sacks in four consecutive seasons from 2008 to 2011, becoming just the third player in 49ers history to do so.